In what is becoming a spring/summer series for me, this is a photograph of Bleeding Hearts shot in ultraviolet light and the camera capturing the fluorescence that results. Regular camera + pure UV light can create magic!

This shot was also made on the new Panasonic GH5. I’ve been evaluating the camera over the past couple of weeks and while I don’t have a full review, it has exceeded expectations in many ways. For a high ISO image (3200) on a MFT sensor I expected more trouble, and with an extreme scenario like UVIVF (ultraviolet-induced visible fluorescence) it handled itself well. This image is uncropped, but obviously edited.

For those that don’t know my “usual” gear, it’s a Canon 1DX mark II and a wonderful assortment of lenses, flashes, and accessories to push photographic limits. The Panasonic GH5 is proving to be a capable replacement for this in some ways, with the benefits of a smaller size making up for other minor shortcomings for the work I’m currently doing. In the coming weeks I’ll be shooting a few video projects with this, but as a stills camera I’m not in the least disappointed.

I was surprised when I saw Bleeding Hearts out so early in my gardens (this image was taken at the end of April), and needed to get a shot of them before the hearts opened up – I figured this would make for a cleaner image overall for this purpose. It was fascinating to see that different parts of the flower fluoresced back to the camera at a different frequency. Many flowers will fluoresce into the blues and purples like this giving a characteristic look, but my experiments with daffodils revealed yellow-green fluorescence.

I suppose it makes sense that the most common fluorescence would be in the purple-blue hues. I read a study that referenced nitrogen content in “resilin”, a rubbery/elastic compound commonly found in insects. Since plants are often fueled by nitrogen, could it contribute to these glowing colours in some way? The question is more complex than one single element can explain, but at least it’s a place to start.

From a processing standpoint, there was one surprise: the noise reduction algorithms in Lightroom and Photoshop are terrible. Likely due to the unusual colour palette and gamut of these images, the noise reduction slider actually added a ton of noise in certain areas of the image. I did a double-take on this, and even restarted to Photoshop thinking it was some sort of glitch… but saturated purple-blues are tough to handle with most edits. Brightening them shifts them too far to purple and requires a hue shift back, contrast dramatically increases saturation which isn’t expected, and noise reduction is just backwards. This is not fault of the camera gear used, but the processing “engine” not properly handling this fringe-case of an image. Printing these photos becomes an even more epic challenge!

The adventure continues… there is much to discover here!

(If you’re curious to experiment with these kinds of techniques as well, I can answer any questions you have. I’d also be happy to show you how it’s done in a one-on-one workshop in my studio. If you’re interested, let me know! I also have group macro workshops available here: www.donkom.ca/workshops/ ) 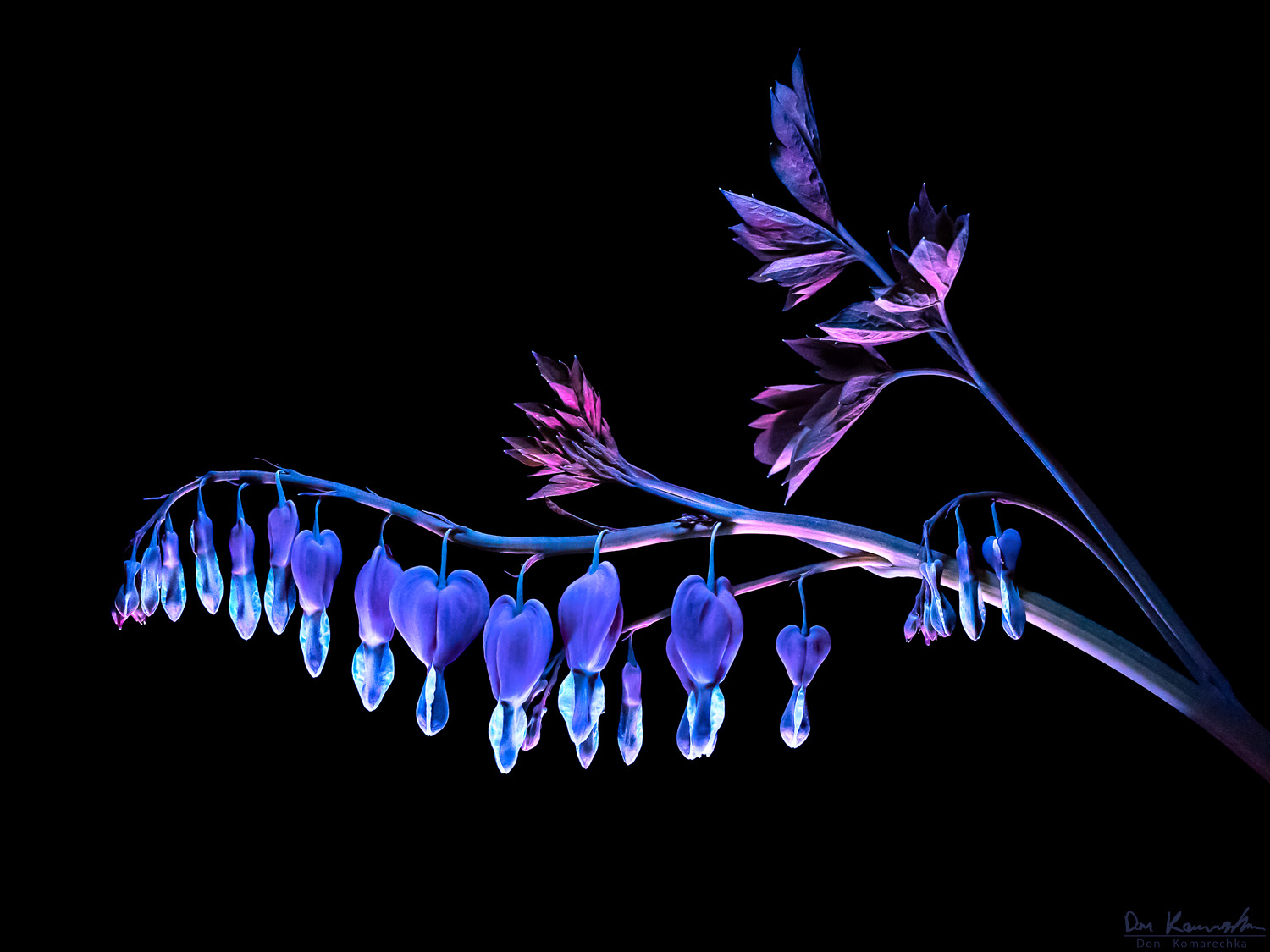