This beautiful cave is located in central northern Bulgaria, and one of my favourite natural locations to visit in Eastern Europe. With multiple “sky lights” allowing the sun to reach the floor of the cave, lush greenery brings the interior to life.

This image was taken with a tiny yet very versatile lens, the Lumix G Vario 12-32mm lens, often bundled as a kit lens. It’s not a terribly fast lens, but it’s incredibly compact and very useful for traveling. This image was taken at 12mm and not cropped, and interestingly this is not an HDR composite: just a single frame was used to shoot this photo! For a super-compact travel lens, you can pick one of these up on eBay for around $150 – almost all of them were sold as kit lenses and people who don’t find a use for them will sell ‘em cheap and brand new!

I thought for sure that I would need to bracket my exposures here – and I did, but as I mentioned above I only used a single frame for this. Thankfully the interior of the cave was illuminated well enough for me to pull plenty of details out of the shadows while still being able to pull back the blue sky. The image from a Lumix GX9 was processed in both Photoshop and ON1 Photo RAW, each to their strengths.

Portions of the films The Expendables 2 & 3 were filmed in this cave, so it might be somewhat familiar to you. They actually constructed a bridge to get their equipment into the cave, and built a rail and tram system as part of the movie which descended deeper into the cave than we have access to as tourists. There’s a good reason why we can’t fully explore the caves: we would disturb the bats. Over 30,000 bats from 13 different species occupy the cave, and the stress/disruptions from filming the movies caused the death or relocation of over 20,000 of them. The numbers are returning to normal now, but a mother bat can have a gestation period as long as six months and only produces one offspring at a time.

There are large concrete circles in various places within the cave (behind me from where I took this photo) and we couldn’t figure out what they were for. A little bit of research confirms that during the cold war, this cave was used to store massive containers of oil or petroleum. Wouldn’t have been my first guess, but it makes sense!

While I’m not much of a landscape photographer, it’s hard not to appreciate the beauty of places like this. 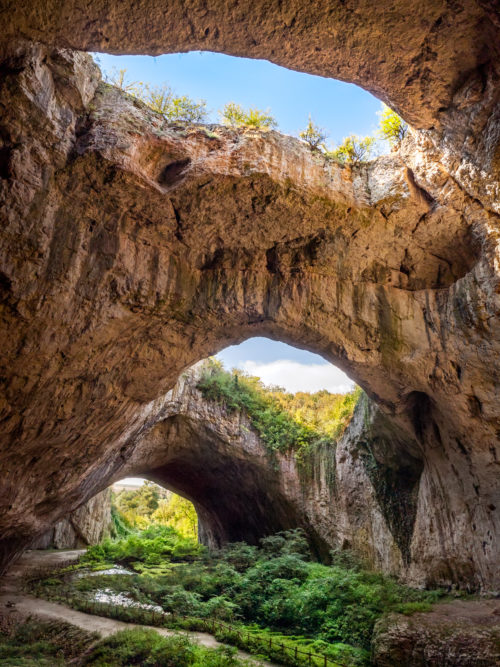