Depth of the Cold

3D viewing transforms this image into something much more magical – a stereoscopic image of a freezing soap bubble!

When crossing your eyes, the trick is to cross just enough so that you see three images. The image in the center will be an overlap of the left and right images, and your brain computes the difference between them as depth. Don’t be too close to a large monitor (too much eye strain) or too far from a smart phone screen (too much trouble with subtle adjustments), find the right position where you can cross your eyes and comfortably focus on the now existent middle image, and voila!

If you can’t cross your eyes or you’d rather use a stereoscope or a VR headset, a “regular” version is just below the cross-eye view on the left. I have a stereoscope here in my studio from 1867 that presents these images wonderfully! The technology is ancient and the viewing experience is almost a lost art. In some small way I’m trying to bring it back.

This image was made with a special full-frame SLR lens made by de Wijs in The Netherlands. Sadly, they are no longer manufacturing them and they are very hard to find in secondary markets like eBay. I’ve been searching for this slightly-less-than-macro lens for a while, to be the third lens I own from that company to make 3D images and it appeared on eBay within the last month. I had to have it, and I have so many ideas to explore with it. My higher magnification lenses didn’t do well with freezing bubbles because they were too large, so I’m glad this lens arrived before the end of winter!

These images are tough to properly visualize, because depth becomes the ultimate factor in their success. The fact that you can see the depth difference between the front of the bubble and the back of it near the bottom is the main selling point here, and everything else enhances that. The editing is fairly simple, basic Lightroom edits with a trip to a free program called “Stereo Photo Maker” to help correct any alignment issues – even the best lens might not get it perfect.

It was them cropped square in Photoshop by cutting the image in half down the middle, overlaying the left side onto the right, cropping square with the “delete cropped pixels” box checked, then the canvas size was expanded 200% to the left, and the left image replaced into its proper position. A small “septim” is placed between the two images to help separate them for viewing.

It’s becoming a lost art. In some small way, I’m trying to bring it back. As archaic as it might seem, I’ll soon be offering stereoviews for sale, the most high-end productions ever done with this medium. Why? Because it fascinates me, and I hope it fascinates others. 🙂 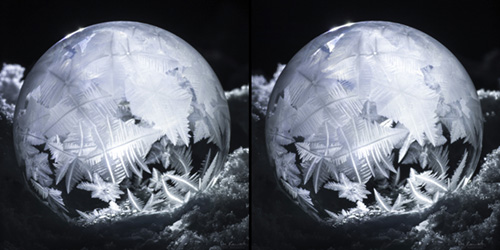 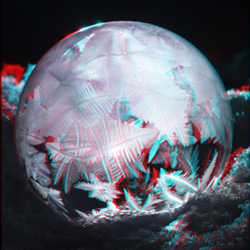