I was disappointed with the “Camelopardalid” meteor shower in 2014, and decided to instead play around with a star trail photograph. If you look very closely, you may still be able to spot a meteor or two… but my focus switched to the stars themselves with the hope of a meteor shower disappearing in the early hours of the morning.

I should state my guilt right off the bat. During a few frames, I beamed my flashlight into the night sky around 3AM or so, and might have annoyed fellow stargazers that were located a few hundred meters away. Our group of photographers specifically chose to travel away from the main group to avoid this, but onlookers might not have been happy about it. My apologies to anyone that I inconvenienced!

The flash light shot was one of five, and I was trying to get my aim perfect – pointed at Polaris, the North Star. This was then followed up by 87 frames of just the stars, each 30 seconds long and combined in a composite star trail image. Combining these images together is easier than you think!

The goal is to create a single well-exposed 30 second image of the night sky. 30 seconds, a wide aperture and a high ISO should give you a good starting point, and adjust the ISO or aperture to suit your needs for brightness. Once you’ve taken a handful of test shots to get your exposure nailed down, you’re set. Using a wired remote shutter release, lock the shutter down and be sure the camera is set to continuous shooting. When one exposure ends, the next one automatically begins and you create a sequence of images to be joined together in Photoshop.

I like to edit one of the images for colour, clarity, noise and brightness in Lightroom as a first step. Once completed, simply copy and paste those settings to the other images in the sequence, select all of the frames and choose “Edit In > Open as Layers in Photoshop”. When they’re all loaded, change the blending mode to “Lighten” on all layers and you’re in business.

I wrote an article of photographing star trails you might be interested in, which you can find here: //digital-photography-school.com/tips-photographing-star-trails/

I used a fisheye lens for this photograph for two reasons. The first being field of view – you can get many more stars in the frame with a 180 degree view from the camera, and this adds texture, detail and direction to the sky. Fisheye lenses are also famous for having unbelievable depth of field at wide apertures. Shooting at F/2.8, everything is sharp when I set the focus properly. Plenty of light, stars and depth, I love my fisheye lens for this kind of image. 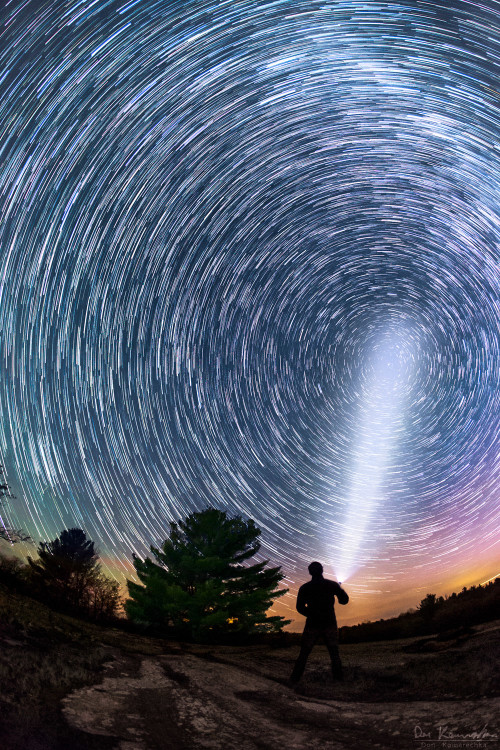