The Iris and the Mantis

This stereo images one of my favourites in terms of depth, and I know you’ll enjoy it: a mantis nymph emerging from the depths of an iris.

To view an image like this, you’ll need to cross your eyes. When you cross your eyes, cross just enough so that you see three images (too far and you’d see four). Focus on the middle image and your eyes will “lock” on the 3D view. This can take a little practice, but it can be done on a desktop screen when viewed small or on a smartphone held 8-12” away from you. Experiment to see what works best! If you have a VR headset or a stereoscope of some variety, you can see this in 3D using a “parallel” version of the image just below the cross-eye view.

In late winter / early spring, I ordered some Praying Mantis eggs. They arrived in an egg casing called an “ootheca” attached to a twig, in a small enclosure that I kept in my sunroom until the hatched. This week I was surprised to see roughly 100 mantis nymphs ready to be set loose into my gardens. Of course, this naturally lead to many photographic opportunities as the nymphs were strategically placed around the garden.

I don’t think these nymphs would naturally find themselves stalking prey inside of an iris, but I knew it would make for a fun composition and these little guys are extremely cooperative. They stay where you place them and pose for extended periods of time, which is part of their survival and hunting instincts. All you need to do is place a small stick next to one and it will climb aboard, and then coax it off of the stick to whatever new location you have deemed photo worthy. Forget-me-nots also worked well, as did many other flowers actively blooming right now, but the iris was a fun twist.

This little guy was placed inside the iris and I waited five minutes or so as it found its way back out of the flower. This was lit with a ring flash held off-camera to the right and was shot with a deWijs 3D macro lens which contains two lenses in a single lens barrel and each half of the camera sensor records an image from one of the lenses.

Composition for 3D is always a challenge as you need to think not only in terms of framing and standard 2D composition rules, but also in terms of subject depth that you would never notice without a stereo image pair. This image was one of MANY that didn’t work as well as I would have hoped, either in terms of missing the focus or ineffective “depth”. I’ve been learning a lot about how to properly set the stereo window for the best effect, and you’ll be seeing more mantis images in 3D from me in the coming days.

All but three of the nymphs have been released into the garden, and my goal is to raise one to adulthood in captivity for some studio work later. It’s unfortunate that more ornate mantis species like the Orchid Mantis is not allowed in Canada without a special permit, but these Praying Mantises are good fun all the same. 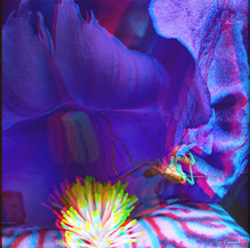