Eye of the Solar Storm

The display of northern lights overhead was beautiful, but with the wide-angle effect of the fisheye lens, it was difficult to get a beautiful display of aurora light everywhere I wanted. I also wanted the stars to pop a bit more, especially because I knew the North Star was in the frame.

I decided not to show a full-on star trail shot here, because the streaks completely overpowered the subtle green hues in the night sky. Instead, I calculated which images to use, having their distance grow exponentially to lead into (or away from) a solid spiral pattern. I then picked the closest image to the equation that was visually pleasing, and stacked the images together using the “lighten” blending mode in Photoshop.

7 shots spanning over 2 hours in total were used, and the aurora fell in just the right places to leave the center of the spinning stars clearly visible. (although, it’s us that are spinning – someone always corrects me!) I’ve just printed this as a 32″x20″ canvas and it looks stunning, the first of many prints I make from my adventures in the Yukon.

The full shoot was for over 6 hours, but the images used were at the most active part of the storm. 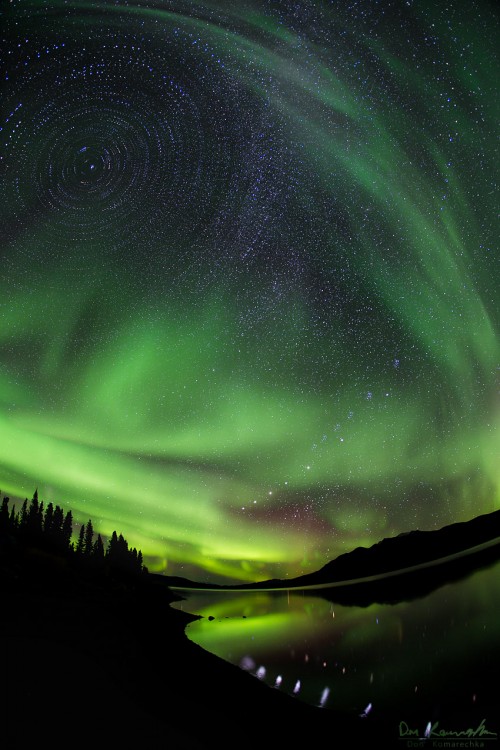