Please do me a favour and view this one large by clicking on the image. It’s worth it.

Revisiting the same concept in photography can be rewarding. New creative choices come to mind and with each revisit, you step further “outside the box” of whatever initial concept you first envisioned. This image is a great example of this, and I’m sure it’s only a stepping stone in a larger journey. Let me explain what you’re looking at and how it was created.

This is a seed from a small wildflower (likely Prairie Smoke or something quite similar). The “fluff” on the seed does a great job at attracting water droplets, and when sprayed with a mist bottle they can produce a beautiful array of spherical droplets. These tiny droplets act like a lens, and refract an image of whatever is behind them. The next part of this trick involves a flower.

I prefer daisy-like flowers for these kinds of images, due to their circular flat shape. This particular flower had a blue center, which added a nice touch of contrast to the composition. The flower is placed behind the seed, and it becomes the out-of-focus background. It pops into focus in each of the droplets that have a direct view to it, filling the scene with dozens of tiny flowers.

The next step is shooting all of this on the first of water. The seed is clamped in place with a “third hand” tool, which is resting just below the surface of the water (in a large glass bowl). The water adds an extra dimension that balances the shot and makes it almost magical. The trick here is to shoot with the focal plane as perpendicular to the water as possible, getting very low to the surface usually achieves this.

Next comes the flash. I’ve found the best angle to get solid reflections is to hold the flash off-camera and above the subject. Care should be taken to aim the flash more towards the flower than the seed, but still hitting both objects. Nothing too fancy here – just an ordinary off-camera flash on a cord, E-TTL mode with a bit of flash exposure compensation to get the right exposure.

The final efforts are made in post-processing, resulting in the combination of 19 separate frames for focus stacking. I can’t get the entire seed and all the droplets, refractions etc. in focus in just one frame, so multiple images are combined to achieve the full focus I’m after. This technique has the added bonus of keeping the background sufficiently blurry and not competing for attention in the scene.

One of the biggest challenges here has nothing to do with the camera; the randomness of each seed can produce very different visual effects. It took quite a while before I tried this seed in this combination (a few hours). I loved the curve, but it’s something I wasn’t initially trying to find.

Also, this was shot at 1:1 lifesize magnification. Anyone with a standard macro lens, extension tubes or close-up filters can do this kind of work. 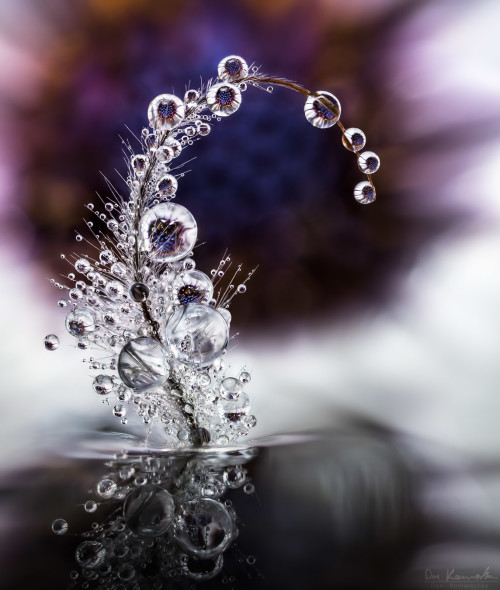 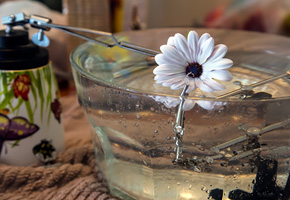 Behind The Scenes:
Here’s a glimpse into the final setup used to create this image. Experimentation and trial & error were required to arrive at this composition; while the images taken along the way were promising, I knew I still needed to investigate further.
Hiding the metal clip behind the brighter reflection on the surface of the water was difficult, but after a few attempts the correct alignment was found and I started shooting the images that would be focus-stacked into the final photograph. All created on a kitchen table!