A dragonfly glowing under ultraviolet fluorescence… something I’ve been wanted to photograph since my exploration of fluorescence began: and here she is. Read on!

This female Twelve-spotted Skimmer was in my garden. I recently purchased a large bug net to try and get one of these beauties to cooperate, as they decidedly wanted nothing to do with me. A quick swing of the net and she was mine. I was hoping she would be more cooperative, but I didn’t want to hurt her, so a quick dip into the freezer for 3-4 minutes made cooperation much easier. I’ve done this with other insects before to put them into a temporary “hibernation”, which gives just enough time to setup and take the photograph before normal activity resumes. I hate to do it, but this shot required a controlled studio environment that I wouldn’t get any other way.

When she awoke, I placed her on a Bee Balm flower – one that she had been hunting nearby outside. I knew from previous experience that these flowers would glow red, and it was my hopes that the wings here would glow blue in contrast. Like winning the lottery I was right – bam! I’m still a little giddy from the moment I first saw the results.

Some insects have wings that will fluoresce under UV light, but this is drastically in the minority. The only other insect I’ve seen this with is the cicada. Based on its larger size, I also tried to shoot bumblebees and damselflies in UV but their wings are still completely transparent. So are honeybees, house flies, hoverflies, and wasps – at least the species I’ve tested. Even a smaller species of dragonfly I looked at later in the day had non-fluorescing wings. You never know what you’re going to get until it jumps out at you!

This image was shot in nearly complete darkness so that there is no visible light that makes any impact on the image. Everything you see here is light that has entered the visible spectrum from the ultraviolet spectrum – fluorescence. This is a view of nature rarely seen and never seen outside of “laboratory environments”… yet it can be so incredibly beautiful. Of particular note is the pattern in the wings – like lighter blue tiles were chosen in the mosaic to radiate in curving lines away from the wing muscles, captivating patterns emerge.

My best guess on these patterns has to do with cell thickness – these lines would be thicker and offer support through the wing structure, similar to the frame of an airplane. It might have something to do with “fueling” the wings like human muscles have a blood supply, but I don’t think the wings are the active component here. I’m not an entomologist, but I’d like to hear from them on this!

This is a three image focus stack, which is very difficult to do in UV fluorescence due to the recycle time of the flashes. 2-3 seconds between shots in the dark? I took about 10 shots just to be sure, but the dragonfly was moving after the first few – thankfully I got what I needed to get wing sharpness from tip to tip. This in my top 5 of UVIVF (ultraviolet-induced visible fluorescence) images so far, with more to come I’m sure!

This kind of photography is an incredible small niche and required very specific custom-made equipment that… isn’t cheap. I’m happy to do one-on-one workshops with my gear however – if you want to learn this, just send me an e-mail – don@komarechka.com

If you want to see more of my work in action, check out the documentary film “Mosquito” on Discovery. If you see any fluorescing insects, that’s me. 🙂 //www.discovery.com/t…/mosquito/full-episodes/mosquito (content is US region locked, sorry everyone in Canada and elsewhere!)

Epilogue: Shortly after I took the image, this girl started to get really active and I quickly put her outside. She flew away, and is hopefully roaming the gardens again – unless I scared her off! 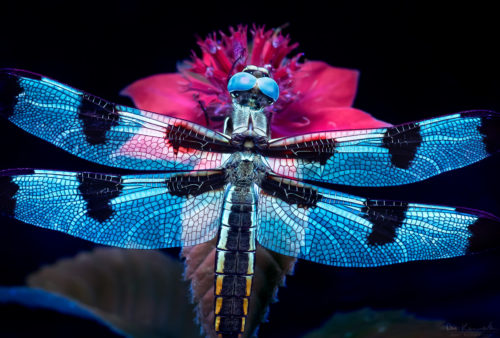