High in the mountains of Bulgaria, there lies a derelict Soviet-era meeting hall / monument bearing the name “Buzludzha” (Бузлуджа).

The front door was originally welded shut, and at some point in the recent past someone must have cut the weld and broke a hole in an inside door. We fit through that hole. Walking up a set of stairs in near darkness, we entered the upper chamber, seen in this photo.

Built in 1981 and abandoned less than a decade later, this structure has been left to elements and to looters. The roof was originally made of copper, which was probably the first item to be stripped and sold by scavengers. Some of the fresco murals look deliberately destroyed, others have started to fall to exposure to weather.

The roof now consists of (what appears to be) a thin layer of corrugated sheet metal. When the wind picks up, the roof rattles so loudly it sounds like collapse is imminent. Being on the top of a mountain, it’s always windy so the visit was a little scary.

I find this image beautiful, sad, and captivating; A fallen era and a history that many people want to forget. Graffiti on the outside of the building reads “Forget Your Past” – I say remember it, and remember this… 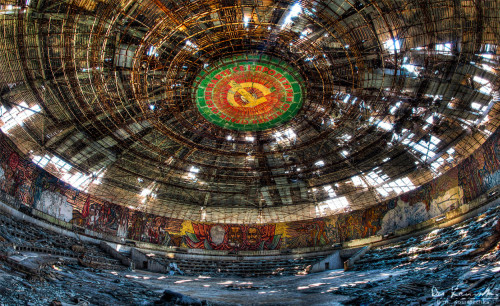