Photographed at the Barrie waterfront as a storm cell passed through, giving off quite a light show. I was actually photographing from the shoreline visible in this image as the storm passed directly overhead, drenching me and my camera. Another photographer was there too, shooting with a 7D that may not have survived the storm. Happy to have weather-sealed gear!

I traveled to the spot where I took this image for a better vantage point as the storm passed off into the distance. Because the lighting was quite far away from the camera, the thunder faded to silence even though the light show continued to impress.

The camera was set to intentionally underexpose the frames, in the hopes that the extra light from the lightning would balance the exposure better. 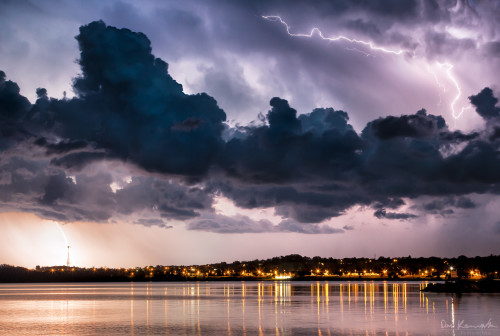