It’s amazing how transformative ultraviolet fluorescence can be. This is a black weevil sitting on a white daisy to our eyes, but when photographed with intense ultraviolet light, the fluorescing light bouncing off is magical. View large and read on!

I was out for a walk with my daughter yesterday and along the road was a small patch of daisies. I was going to pick one for her, but I realized she had already fallen asleep. I still went to pluck one for later, but noticed a very tiny weevil resting in the center. This quickly became MY flower, and while my daughter slept in her stroller I hurried back home to get this weevil unto my UV studio setup.

For reference, this is likely the species of weevil that is in my image: www.kerbtier.de/Pages/Fotos/FotoLargeN/Curculionidae/Ceut… – the Cabbage Seed Pod Weevil.

Weevils are generally cooperative insects, and this one was also sluggish from a colder night. I could gently poke it’s backside to get him to move in the direction I wanted, towards the outer edge of the petals. He was still somewhat unpredictable, but eventually this pose happened and I thought it was more dynamic “hanging off” than just a static resting position. Shortly after the image was taken, he warmed up and became quite active and I was unable to get the same level of cooperation. That’s quite alright – I already got the shot I was after.

The flashes I’m using only emit ultraviolet light, which the camera cannot directly see. If UV light bounced back to the camera, we’d get a black image. The visible light that bounces off the subject has fluoresced from the UV spectrum to give us what you’re looking at. UVIVF or UltraViolet-Induced Visible Fluorescence is the physics at work here – nothing special about the camera, it’s unmodified – it’s all about getting a purely UV-only light source.

Most things fluoresce, but to such a small degree that we would never know it. I’ve modified Yongnuo 685 flashes to remove a UV blocking filter and then adding two 77mm filters to the front of the flash head: a MidOpt BP365 and a Hoya U340. Each of these block the visible spectrum almost entirely, but each one bleeds a bit on opposite ends of visible (one red, the other purple). Combined, the isolate UV very nicely. They’re not cheap, however! In order to get enough light for this image to be made, I need three of these flashes at point-blank range at full power.

Even with that much UV light, this image required ISO 8000. While the depth of field is very shallow, F/8 was used to get as much in focus as possible at roughly 2:1 magnification and cropped in heavily from there. Technically speaking this image is just barely possible to be made – it pushes limits. Visually, we end up with something out of this world – a white flower with a black beetle become something enchanting.

While I can’t explore UV photography with large groups, I most certainly run private workshops in this area! Just send a note to don@komarechka.com if you’re interested. 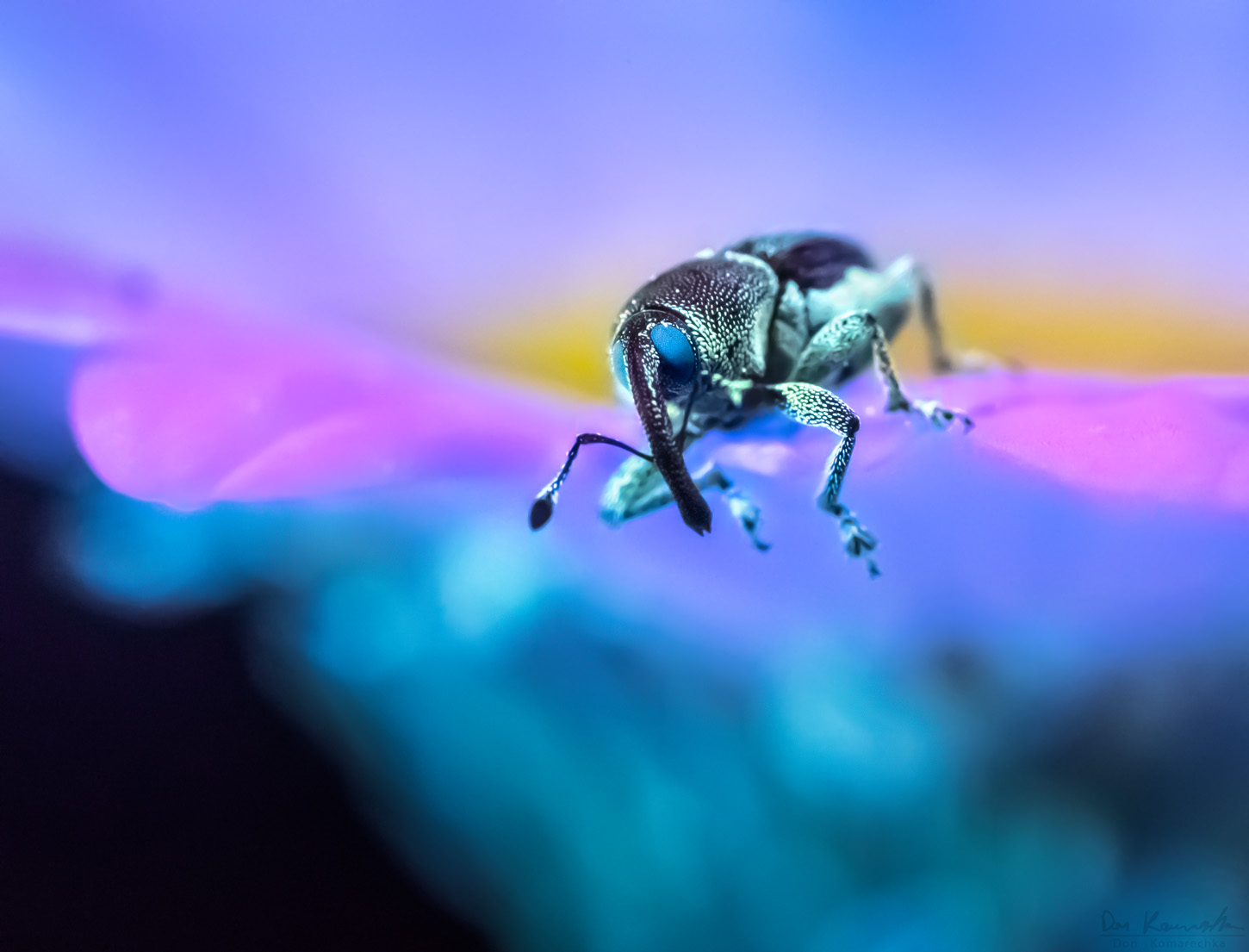