While walking through a row of flower shops in Varna, Bulgaria, I spotted one solitary poppy among an array of daisies and roses. It was a huge flower, and I knew it would work well for a refraction photograph. Typically I choose daisy-like flowers with flat symmetrical petals, but poppies are close enough in design to make the same magic. Along the streets of Varna you’d had a hard time missing the dandelions, so it was easy to pick up a seed head and bring it back to our apartment to set up the shot.

Aside: for those of you that don’t know, my wife is originally from Bulgaria and we visit every year or two. It’s an incredibly beautiful country with multiple mountain ranges and a coastline, located in Eastern Europe north of Greece and Turkey. If you’re looking for an interesting travel destination, this is it!

The staging of the shot is fairly simple, but all of the puzzle pieces need to fall in just the right place. I used my Canon MR-14EX II ringlite in manual mode attached to a Panasonic GH5, though the ring was not fixed to the lens. The only way you can successfully use a ring flash for droplet refractions is to push the ring forward enough that it doesn’t cast any light on the droplets – effectively, the seeds are placed inside the center of the ring. If the flash was properly mounted to the lens, the light from the flash would hit the droplets first and flower second, resulting in nasty catch-lights in the droplets and an underwhelming refraction effect.

I’m loving the GH5 and the whole “premium micro four thirds” camera idea. In the case of macro photography, the 2X crop factor really works to your benefit to increase the magnification you’re able to achieve without any extras. No extension tubes required, just a macro lens to get this close – and I could have gotten closer! The Leica 45mm Macro from Panasonic is a gem… I’m going to be sad to give this back at the end of the month. Rapid-fire shooting is essential to get focus through the proper “slice” of the subject, as I physically move the camera forward and back to shift focus on this scale. The resulting images could have easily been focus stacked, but I felt that a single frame captured enough of the magic.

Shooting at F/8 gave me enough foreground focus to work with, while still presenting the background (the center of the poppy) out of focus. The balance here is always a bit tricky to establish, as the size of the flower (and inherently how far away from the focal plane it is) changes every time. There was about 10 minutes of tinkering in total done with camera settings, subject and light placement, and subject positioning.

The hardest part about this image was getting one dandelion seed to stay intertwined with the other. It’s easy when they’re dry, but as the droplets accumulate the seed gets heavier and falls off. Only one of the seeds is clamped in place! The setup needed to be re-staged four times before a supportive entanglement was found.

If you’d like to try and make an image like this, I teach photography workshops on exactly this subject here in my studio! The next workshop date is posted here: www.donkom.ca/product/macro-photography-workshops/ 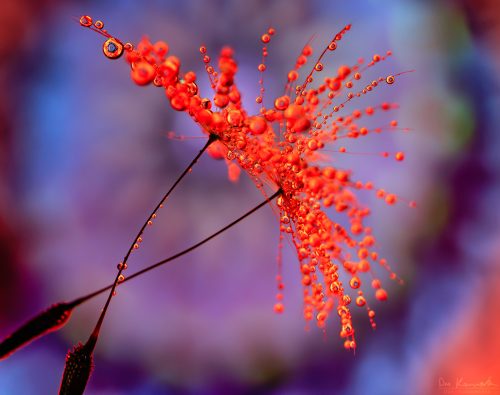