I recently built a new computer, and the ordeal had me ready to smash something with a hammer. Actually, this image depicts a computer processor that I genuinely broke open with a hammer to see the silicon die encapsulated within.

The chip below is an old obscure processor. It’s a UMC Green CPU “U5S SUPER-33”, a clone of Intel’s early 486 chip. The older processors like this one were built with much larger transistors when compared to today’s CPUs, and offer better details when photographed. The first 486 chips were manufactured with a 1-micron process (1000 nanometer), which is gargantuan compared to today. Modern CPUs are built around a 22nm process, allowing considerably more transistors to be packed into the same space.

These old processors are worthless, with the only possible value being the gold they contain. It’s sad to see technology discarded, so I’ve saved a handful of old processors to photograph. Unfortunately, the silicon is encased in ceramic and metal with no easy way to get inside. I’ve read that some people use various acids or solvents, sometimes even extreme heat to break through the packaging… but my best experiences have been with a hammer. 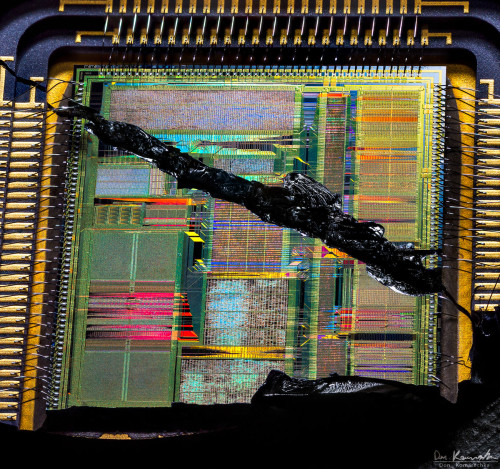