I have had this story in my mind for over a year: have a glowing rock looked to as a source of life by the surrounding plants; a surrogate for the sun. Flowers bend over to reach towards this precious stone rather than the sun itself. If you’re curious how an image like this comes to be, read on!

Let’s start by listing the ingredients here:
Cerussite: a lead ore that fluoresces a sun-like shade of yellow. This was an eBay purchase for around $20 so a cluster of these tiny crystals, many of which could easily be removed without damaging them. One particularly bright terminated crystal stood out for me, and I placed it into this scene.

Creeping Thyme: The crystal is nestled into this wonderful groundcover – $5 at my local garden store. I figured it would have enough depth, and the tiny little hairs would catch some of the fluoresced light off the crystal.

Irish Moss Flowers: The same garden store, also for $5, had a few Irish Moss plants for sale, and one of them had begun to flower. I knew I needed flowers roughly this size based on the crystal size, and their long stems (relative to the size of the flower) would make them easy to position using Third Hand tools. Delightfully, their pollen also faintly glows white!

A behind-the-scenes view of the image to show you how everything was arranged can be seen below the photo.

You’ll notice the alligator clips and tweezers at the top of the frame holding three of the flowers, the remaining two just placed on the sides without much trouble. Three UV flashes were placed as close as possible to the crystal to allow it to glow brightly, sending its light into the constructed scene. I used a 30-second at ISO 200 on the Lumix GX9 to get enough light and a high-quality image. Only one image was used (no focus stacking) set to F/18 to maximize the depth. Even so, the flowers had to be very carefully adjusted numerous times to ensure that they were all exactly within the focal plane of the lens. If one was too far back or forward, by a matter of a millimeter or two, it would fall painfully out of focus. I had to work quickly here as the flowers needed to be picked from the moss to position properly, and as time progressed they would begin to wilt.

Some important enhancements were done in editing. The stems of each flower were largely straight, but the narrative needed curved stems to make it feel like these flowers were reaching in. Some quick work with the Liquify tool in Photoshop handled that nicely. The tops of the flowers also needed to be darkened, as the UV flashes were causing them to fluoresce on both sides. To enhance the concept of this mineral providing the light for the image, the sides of the Irish Moss flowers facing away from the crystal were darkened, as were the lower corners of the frame. Editing as done partly in Photoshop and partly in ON1 Photo RAW.

This is one of my favourite fluorescing images to date – it turned out almost exactly as I had pre-visualized it. A very different take on the Midnight Sun found in Far North summers. Onward! 🙂 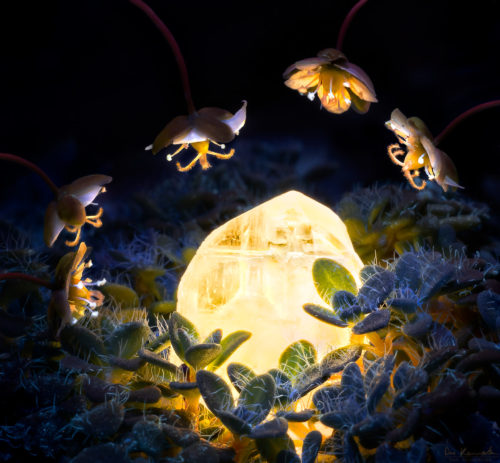 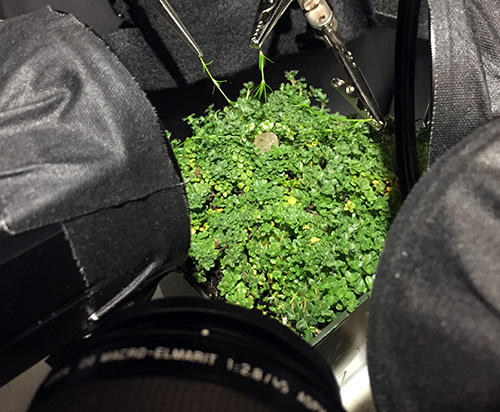