The glowing City of Toronto. Clearly visible in this photo is St Michael’s Cathedral, Yonge/Dundas Square, and the CN Tower lit as a DNA strand – a one time occurrence only ever happening September 25th, 2010.

This photo was taken near the downtown area of the city, next to Ryerson University. Its not often that inner-city landscape photos show themselves this way. I was attracted to the older buildings in the foreground, and the skyscrapers reaching in the distance.

Photographed from a rooftop with the camera perched at the edge of a small wall. 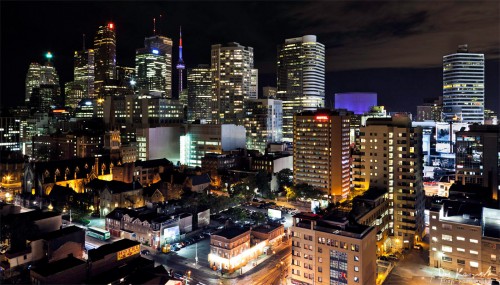