Glow of the Cicada

Immediately, you might think that this cicada looks a little more magical than most. You’d be right – here is the same creature photographed with “regular” light: donkom.ca/extra/cicada.jpg – so, what’s different? The same camera is used, but the image is made with intense ultraviolet-only flashes. The image that you’re seeing is the result of fluorescence!

A few previous experiments have given me the hint that certain insects will fluoresce. In fact, nearly all compound eyes that I’ve put in front of my UV setup have shown a “glow”, but the wings of this cicada (Magicicada septendecim was due this year) just take the cake. Appearing to inspire science fiction architecture, the patterns are otherworldly and they have a depth completely missing from the “normal light” version of this insect.

Some insects glow very brightly under UV light – scorpions and some millipedes come to mind. This has to serve some biological purpose that’s introduced through evolution. Imagine an insect that doesn’t reflect UV light, but rather transforms that light into the visible spectrum. Many insects can see UV, which would make a UV fluorescing bug darker in the UV spectrum. I tested this with invisible ink (glows under UV light) and photographed it with a camera that detects only UV light. The ink appears darker than the paper, because the reflected wavelength of light has been pushed into the visible spectrum. Science!

So, what’s the purpose of these glowing wings? I have no idea. One theory might be to attract a mate but having UV-dark wings, depending on how fine-tuned cicada’s are to the UV spectrum. I would be less inclined to think of it as some kind of a defense strategy, since they already have a pretty solid one: hibernating for 17 years before living as an adult for four weeks. I remember the first time I saw a cicada, and I was amazed when I learned it was older than I was.

This little guy (or gal?) was found on a bedsheet we had hung outside to dry. I took it inside, and it was barely moving – probably at the end of its life, though I don’t have a frame of reference for how these creatures usually behave. Maybe they are as docile and positionable as a Walking Stick or a Praying Mantis! It was cooperative for the photos for the most part, and was let go after the photo shoots in UV and visible light. It was placed on a camera filter with a reflective coating, a MidOpt 900nm infrared filter. I thought the mirror would reflect UV well since the filter was designed only to pass longer IR wavelengths, and I was right.

I’m using two flashes modified for full-spectrum photography (Vivitar 285HVs, really cheap on eBay). I disassembled the flashes to remove the UV-blocking plastic from in front of the Xenon flash tubes, and then used gaffer’s tape to affix Hoya U-340 and MidOpt BP365 filters in front of them. The combination of these two filters block all visible light, but let UV light pass through. These two flashes were set to maximum output at point-blank range, and the camera still needed to be set to ISO 4000 for this exposure. Thankfully the cicada was standing perfectly still, allowing for a focus stack of six images. 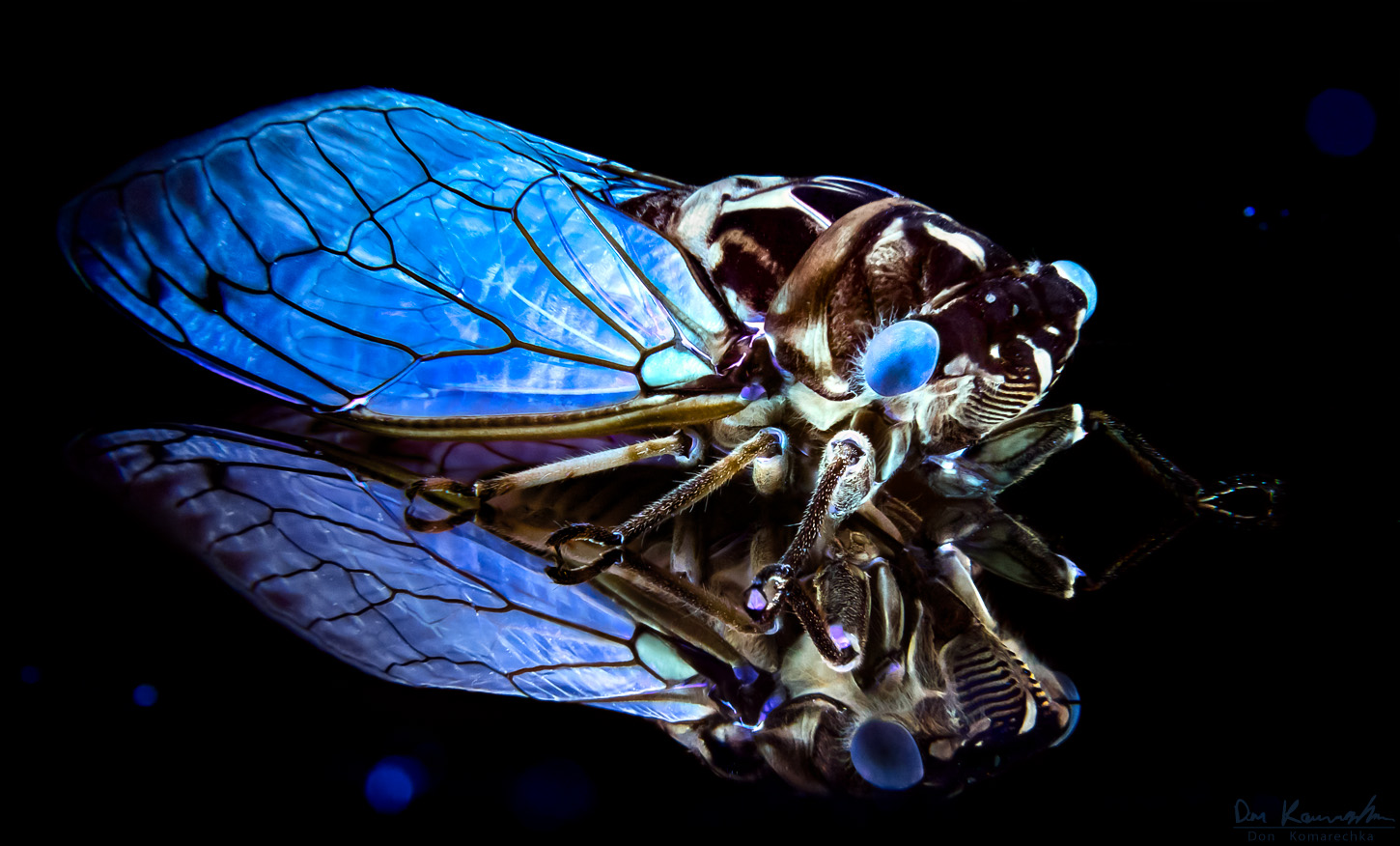