I felt so inspired after teaching a weekend-long private macro photography workshop that I needed to explore further after it was all over – this evening’s prize is a weevil on a flower, floating on the surface of water with a Gerbera Daisy in the background for colour and abstract details. View large!

When I hold photography workshops I rarely pick up my camera, unless it’s to show a specific technique or to illustrate a concept. I don’t hold anything back during these sessions, but there is always more ideas to explore than there is time in the day. One of the last things we shot was this tiny Green Immigrant Leaf Weevil that my loving wife found in the kitchen. Instead of killing it, she called down to see if it would be of any use to use. Her description was “it’s tiny and green!” and I knew exactly what she had waiting for us.

After my student, Carl, headed out for the evening, my thoughts on the subject kept coming. Originally the “boat” we were experimenting with was a gerbera daisy petal and it works remarkably well, but knowing that I have this captive and cooperative weevil, I went through the garden to find this blue-purple flower with a bit more dimension for another go. An hour later, this is the image that resulted. Carl got some spectacular images of a jumping spider in a similar scenario that I’m envious of, but I still had this little green beetle hanging about for my own amusement.

A few things make this image special to me: The surface tension of the water revealing abstract rings of colour from the flower in the background, the depth of flower through the frame, and the fact that the weevil is “dipping it’s toes” in the water. It was also shot on the Trioplan 100 lens from Meyer Optik which I didn’t expect to be using for a shot like this, but the narrow barrel on the lens allowed me to get closer to the surface of the water for a better reflection.

Here’s a behind-the-scenes image of the setup, for those curious. The weevil had been set free before I took this picture but it illustrates the core components: donkom.ca/bts/IMG_3041.JPG

For those that haven’t dealt with weevils, they can be a pest in the garden but they are rather cooperative insects that don’t require cold temperatures to remain docile and slow. Put them where you want them, and they’ll slowly move about in a way that you can somewhat control. This little guy was happy drinking from the water, and just lifted his (or her?) head up when the photo was taken. 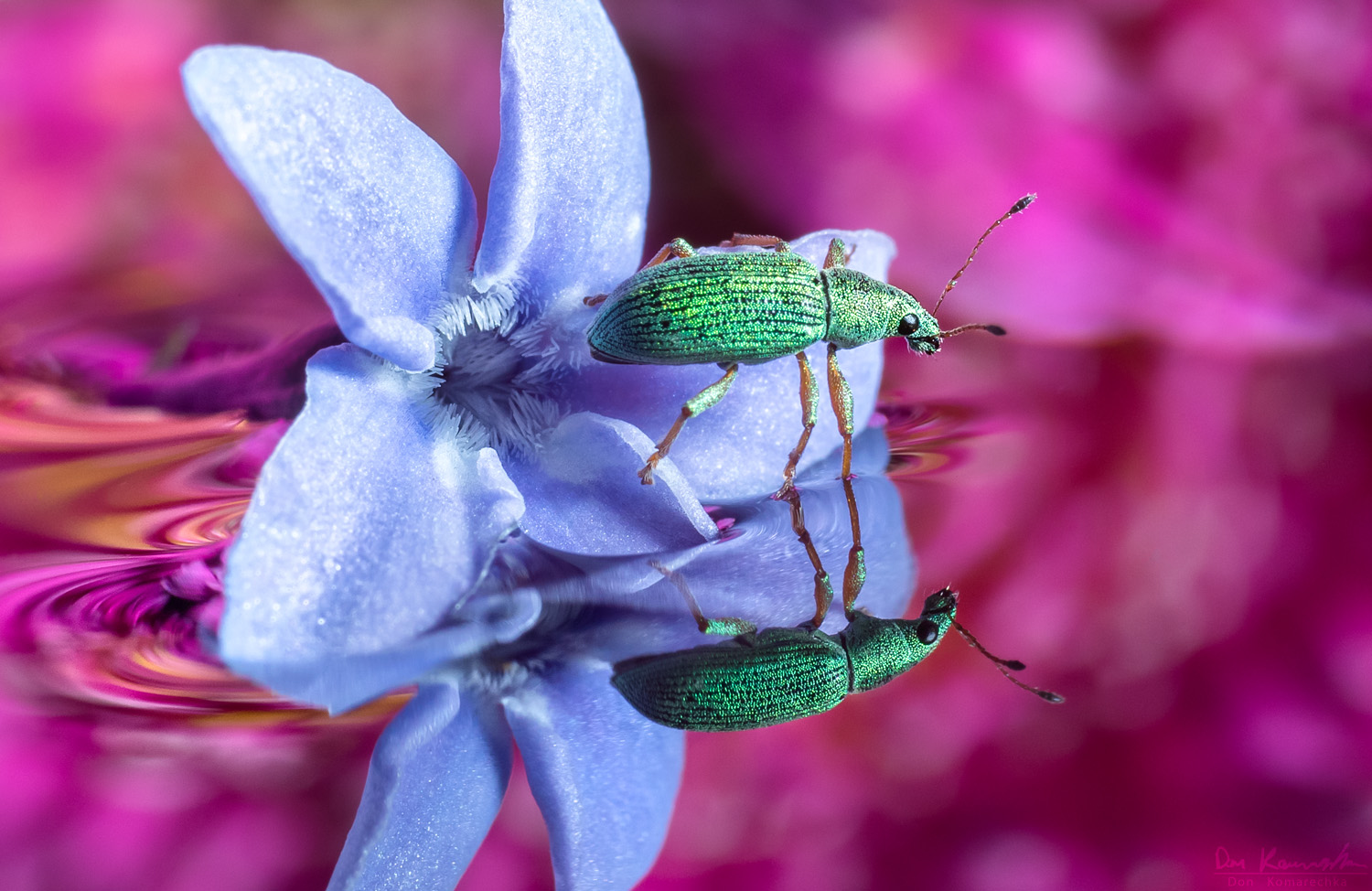