A fun deviation from snowflakes, I decided to try my hand a fun experiment: photographing soap bubbles as they freeze. This been on my winter to-do for a long while, but I’ve always been so busy with other projects to make an attempt… here’s my first attempt at the subject (from early 2015)! This post was originally written when the bubble was photographed.

This is a difficult subject to photograph, partly due to the difficulty in getting a bubble to not burst on impact with the snow, and partly because it starts to freeze almost immediately. This leaves very little time to get the camera and light in the proper position before the entire bubble freezes into a shell of frost. Thankfully, my work with snowflakes has developed the necessary skills to most fast and work handheld, which were put to use in this image.

Frost bubbles have another challenge, in that they are very dynamic subjects. Even at the fastest rate of speed my camera can fire, the crystals show noticeable signs of growth and/or movement. This means that focus stacking is impossible, and at the scale I was shooting the depth of field is just barely big enough. I could push it slightly further than F/10 which is what I used here, but it wouldn’t make a huge difference at this scale. Shallow focus is an element you need to work around.

This bubble is lit using a high-powered LED flashlight which allows me to visualize the proper angle faster than using a regular flash. By the time I took a test shot with a flash, the chance to photograph the bubble will likely be over.

Creating these bubbles is pretty easy, and I found a recipe for stronger bubbles online:
6 parts water
2 parts dish detergent
1 part white corn syrup
The corn syrup acts as a thickening agent that makes the bubbles more stable on impact with the snow, but most of them were still breaking on contact. Smaller bubbles tended to survive longer.

Wind was also a problem. Earlier in the day my experiments were thwarted by a light breeze, but that was quickly solved with various cardboard boxes arranged as a shield.

For a first attempt, I’m pretty happy with the results. I think greater success will be had with smaller bubbles, so I’ll be working on that next. It’s a fun project when the snowflakes aren’t falling!

Of course if there are beautiful snowflakes around, forget the bubbles… grab a copy of Sky Crystals and get shooting! 🙂 www.skycrystals.ca/﻿ 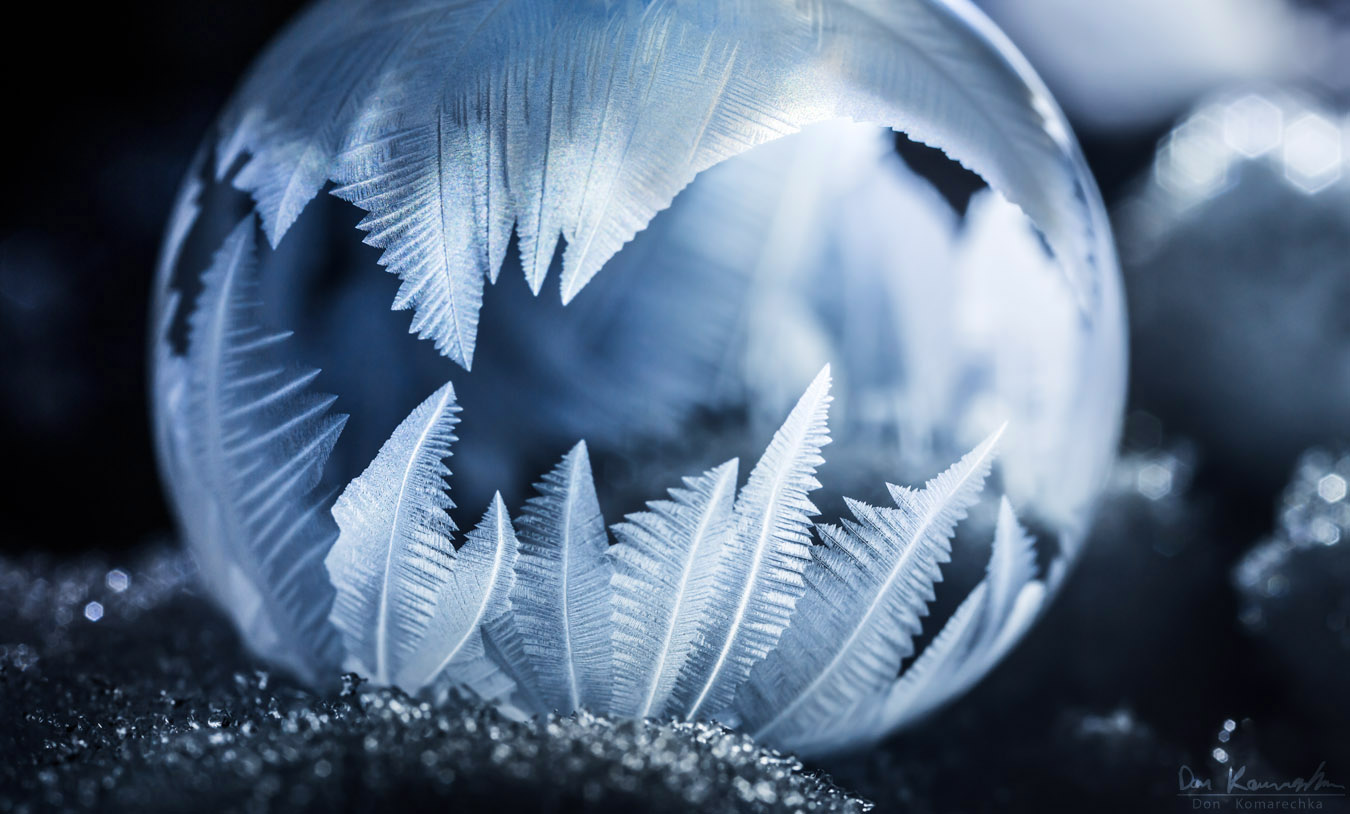