I decided to snip off a few branches from our Christmas tree and keep them for a variety of winter experiments, including this soap bubble shot. I think it adds an extra level of depth to the image, taking nothing away from the beauty of the freezing bubble. It’s difficult to get the bubble to not burst when placed on the needles, but roughly one out of ten bubbles didn’t burst and could be photographed as they froze.

There are two things that add magic to the image: timing and lighting.

Timing is important, as these freezing bubbles lose a little bit of their magic when they freeze completely. The opening in the front of the bubble with the leading lines closing in adds drama and depth which would be missing when completely frozen. These bubbles will typically freeze solid in under 10 seconds, so you need to work fast to place the bubble and get the camera to the proper angle and focus distance.

Lighting is where much of the magic comes from here. I’m using a very bright and powerful flashlight, the NiteCore TM36, mounted at a distance and pointed to where I want the bubble to land. I also have a magnifying sheet / Fresnel lens placed between the bubble and the flashlight to refocus the light to be as intense as possible over the area where I expect the bubble to land. I need the most intense light possible because I’m filtering the light to add colours, which diminishes the brightness considerably. The filter I’ve designed uses some fun physics to create pseudo-random patterns of colour which are then refocused onto the bubble to make it feel more alive.

The “fun physics” is based on the phenomenon known as birefringence. A word you may have never seen before, but photographers can see it in action right at their desk if you have a polarizing filter for your camera. Grab the filter and find a cheap piece of plastic like a CD case – often packaging wrap works too, and clear plastic cutlery is always a good bet. Hold the plastic up to your computer monitor, and place the polarizing filter in front of the object and rotate to see the effect. Rainbow colours emerge!

This happens because your computer screen (as a light source) is polarized, the object you’re holding messes with the polarity of the light, and the polarizing filter re-polarizes it which cancels out some light rays to create the colours you see. I’m over simplifying to a large degree, but you can create a coloured light filter this way. I took two sheets of polarizing film and placed them on either side of a plastic box that originally held cotton swabs. Make sure the filters are in opposition to each-other, and you’ve now got a coloured light filter. Science!

Sometimes I play around and create intensely vibrant and saturated colours, but I like the subtle effects here a little more; it keeps the attention on the magic of the bubble and not the trickery behind the scenes. There is a lot of planning involved in making an image like this, and plenty of trial and error before all the moving parts fit together properly. That said, it’s always worth the effort. 🙂

These frozen bubbles can often grow with snowflake-like shapes but on a much larger scale. For all the techniques I use on real snowflakes to make them shine and shimmer in a fresh snowfall, check out my book Sky Crystals: www.skycrystals.ca/book/ – well worth the read if you enjoy macro photography and want to get the most out of the falling snow! 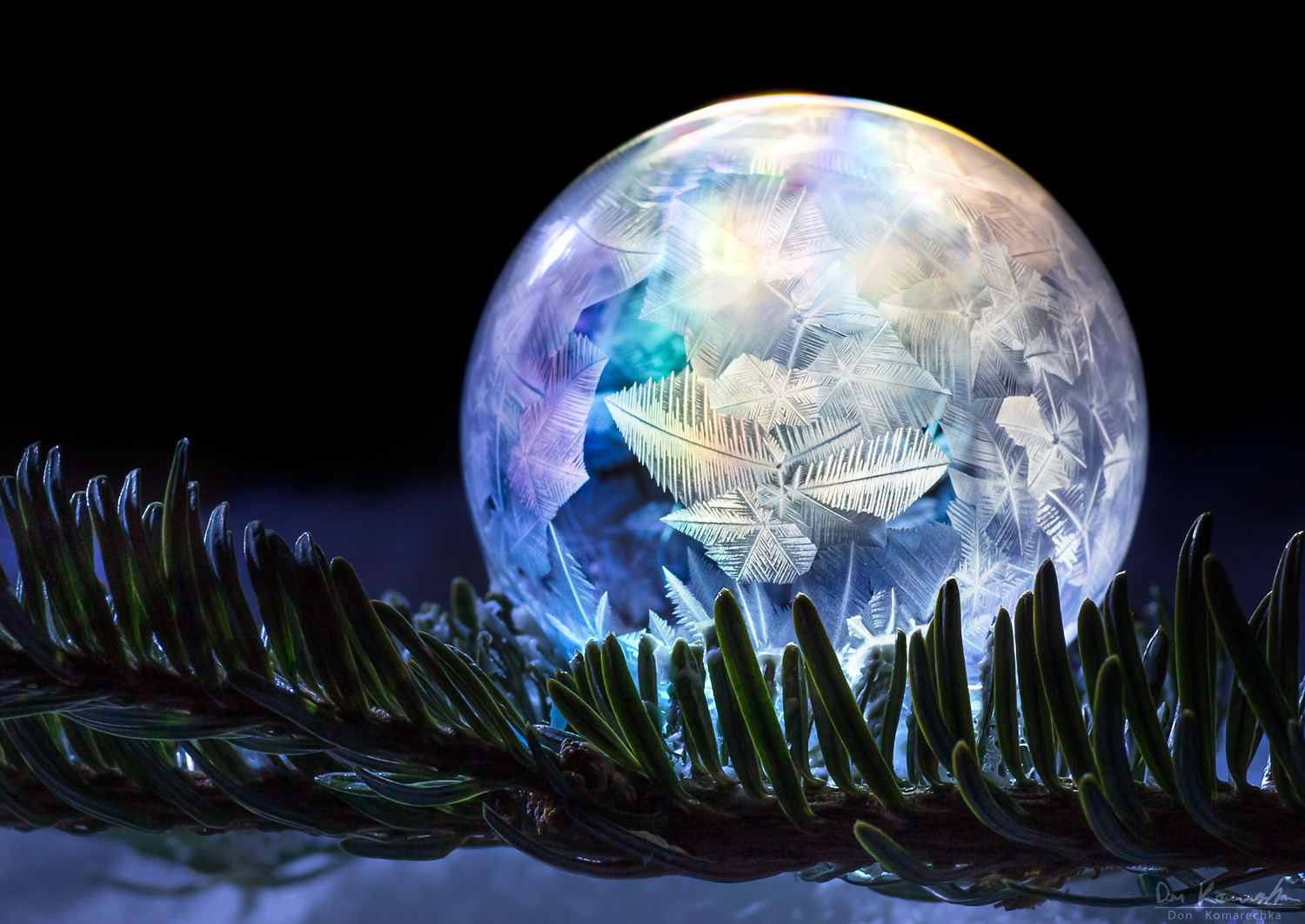