A totally new twist on a freezing soap bubble, and a very difficult experiment to pull off. This bubble is a very special creation, consisting of ultraviolet fluorescing liquid and lit exclusively with ultraviolet light. Say what? View large!

I’ve had this idea for over a year: to modify a camera flash to emit only UV light, and to use that on a freezing soap bubble to make it look like there was no visible light source. It looks like the light is emanating from the crystal itself, but there were many failures along the way.

The first thing I needed was a UV flash. By nature, most camera flashes (those based on xenon flash tubes) emit UV light. However, this light is absorbed by a filter so that it doesn’t escape when the flash is fired. This is generally useful as you don’t want to give a sunburn to your retinas, but the flash needs to be modified to remove this filter. I used a cheap Vivitar 285HV flash for this, so I wasn’t worried about destroying expensive equipment. Removing the UV blocking / absorbing filter turned the flash into a full-spectrum flash, which then required a new filter: to only allow UV light to pass through.

This filter is a UV Black (403) filter, also found as a U-340 filter. It blocks visible light, but allows UV light to pass through. This is the opposite of what you would consider a standard UV filter, and is not a common piece of gear. Only really useful in UV reflective photography, it’s a fun obscure piece of gear that when placed in front of my full spectrum flash turns it into a UV flash! Just don’t look at it when it fires. 🙂

The bigger challenge was coming up with a solution that would fluoresce and crystallize properly. My initial attempts were to use special effect UV fluorescing bubble solution which is commercially available, but the effect wasn’t pronounced enough. I tried adding highly UV-reactive powder (designed as pigment in some paints), but it wouldn’t mix with the bubble fluid and refused to form proper crystals. These were experimented with during various nights when temperatures were between -10C and -20C with zero wind, while I was playing with other freezing bubble techniques. All of the initial attempts were met with failure.

I finally found a formula that would work. Replacing the water in my soap bubble recipe, I used a bottle of invisible ink designed for use in fountain pens. It mixed well with the soap and corn syrup to create a homogeneous fluid that also froze in beautiful frost fronds. When the light from my flash (invisible to our eyes) hit the bubble, the light returned to the camera was a ghostly blue. Because the only visible light was reflected off of the bubble and not the surrounding snow, it makes the snow glow as if the frost is the source of the light. Hence the name “Frost Lantern”.

This image was made in the early hours of this morning when the temperature was hovering around -12 / -13C, and I knew this would be my last chance this winter. We will barely have sub-zero temps through the rest of March, but the ideas are already flowing to push this experiment even further next year. 🙂

My work in winter macro photography often gets technical, but I think this takes the cake! For information on my work with snowflakes, check out Sky Crystals (book): skycrystals.ca/book/ for physics and photography techniques. There is no section for soap bubbles, but expect an e-book at some point in the future on this topic. Hopefully in time for next winter!

If you love winter, you’ll also love “The Snowflake” print: skycrystals.ca/poster/ – taking over 2500 hours to produce, it’s worth a few moments of your imagination as well.﻿ 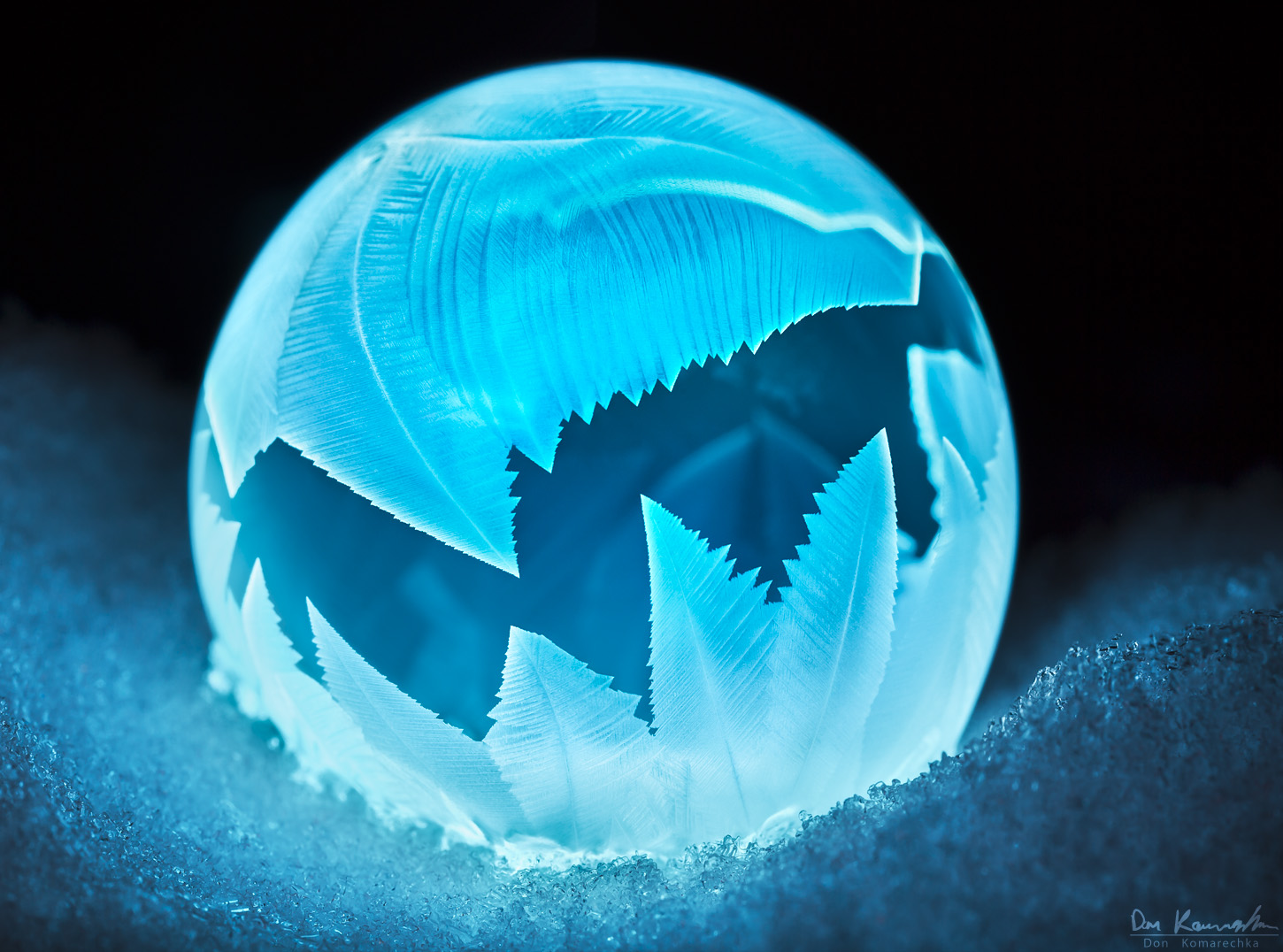