This image… is not ordinary. It’s far from it. View it large and read the description if you have a moment to enjoy this jumping spider stalking prey on this orchid shot in ultraviolet fluorescence.

First off, I need to state that this is a staged image. I found the spider in my car while heading home from the hardware store (broke a shovel trying to remove a stump), and trapped it under a bottle cap. Sliding a piece of paper underneath for easy transport, I put the creature in a jar for a little adventure. We have a small aphid infestation on some of our seedlings and I’ve just let this little creature go to have a feast.

The Yellow Lady Slipper Orchid was found in our gardens – we have both the yellow and pink varieties here, with thanks to the previous home owner for sourcing them and planting them in our yard – such a wonderful surprise to see these beauties! And to further the surprise, they glow in UV light. The stem and leaves glow a deep red, while the flower itself is a light yellow. I almost never cut one of the orchids, but this captive spider made an exception. Shot in studio, one of my classroom tables is the dark blue background you see.

Jumping spiders are fast and uncooperative creatures; I’ve learned this from previous interactions, so I knew that I needed to have everything set beforehand, perfect exposure, focus and framing, before adding in the spider. I cooled him down a little in the freezer, paying very specific attention to timing. I wanted this little guy to be sluggish enough to be placed on the flower and soon became quite active. I guided him into this position with a strip of cardboard, and he (or she?) stayed posed for about a second or two. The pose is exactly what I was hoping for, to create a fantasy narrative: Peering into the negative space, waiting for an insect to arrive at the pot of gold to enjoy the treasure, then to be ambushed.

I feel an absolute need to share a visible-light version of this image as well, so that you can see the difference between UV and “ordinary” light: donkom.ca/bts/DKP_9631.jpg – there is such a shift in colour, light and details that I appreciate as an explorer of the natural world. The flower behaves very interestingly, and the spider’s eyes glow brightly. Many insects have parts that fluoresce, and I had some previous hints that eyes would glow as well. This little spider didn’t disappoint!

I don’t stage things this heavily very often. This was a highly orchestrated shot that took a few hours to produce, and dealing with the personality of a jumping spider isn’t always easy. I make no claims that this is a “natural” image, though I assume such a spider would find this vantage point to be quite beneficial. Even still, this alternate reality is a fascinating one, and I’m glad I was able to capture it.

(If anyone is curious and sceptical of this image, I’d be happy to share with you the RAW file. The colours and brightness have been enhanced slightly, and some dust has been removed, but the image is a true depiction of what was in front of the camera. That’s the magic of it!)

Curious to see our award-winning gardens in person? I host full-day macro photography workshops here, they’ll be well worth your time! Register here, with dates still available in July and August: www.donkom.ca/workshops/ 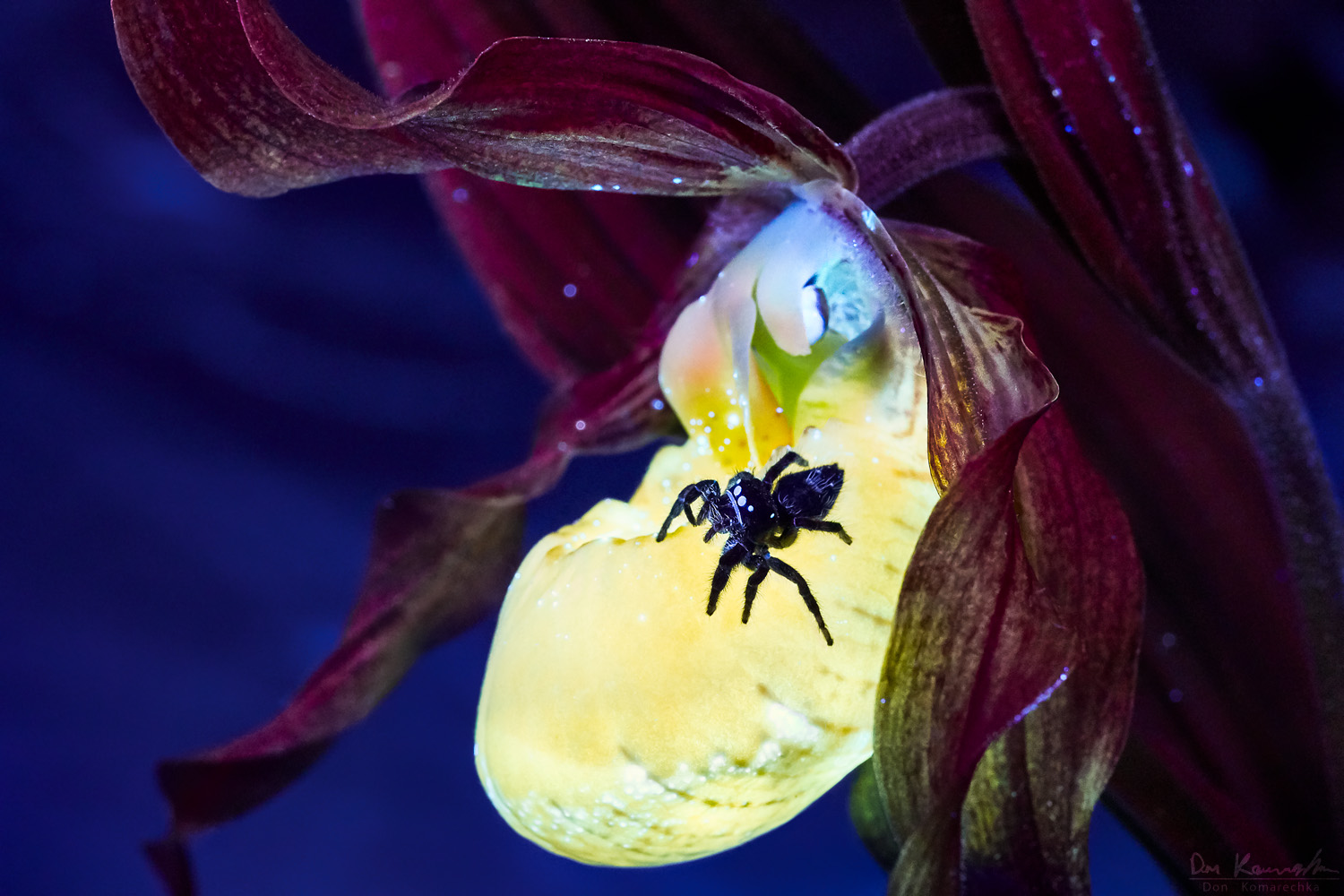