Photographing freezing soap bubbles is a challenge for many reasons, but once you’ve gotten a great image… you need to find ways to make the subject more interesting. Read on for the details, and view large!

This was another image taken with the newly-announced Panasonic GX9 and the lovely Leica 45mm F/2.8 macro (you can read about the camera here: www.bhphotovideo.com/c/buy/Panasonic_GX9/Ntt/Panasonic%2B… ). It’s a more capable camera than a lot of people would give it credit for at its price point and size – my experiments have left me quite pleasantly surprised with it. I didn’t think I’d be liking a micro4/3 camera this much. 🙂

Getting a freezing bubble to land in the center of a flower and begin its frosted “dance” as the ice crystals form isn’t terribly difficult, but there are a lot of things to consider. First, the flower is left outside for a half an hour beforehand to acclimate to the outside temperature (best would be around -10C to -15C if very still air). I’ve found that sprinkling but if snow over the central area of the flower will help the frost to begin growing faster and more evenly.

Getting the bubble placed in the center is easier than you might think when you use the right methods. Using a drinking straw to blow the bubble (not a bubble wand), the bubble can be slowly grown on the end of the straw and will rest comfortably on the end of the straw until you place it down where you want it to be. Using bubble wands or even a “bubble gun” are much too chaotic, a simple drinking straw works best here. It also allows you to choose the size of bubble you’re after but blowing more or less air through the straw.

The bubble is backlit with a very bright (1800 lumens, single diode) LED flashlight placed behind the flower and refocused using a Fresnel lens so that the light doesn’t spread out more than you see it covering the flower.

From a camera perspective, this image was shot at ISO 400, 1/160sec and F/18. A little slower on the shutter speed than I typically choose, and some frames might have motion blur from the moving/growing ice crystals, but this was a pretty solid one in the mix. Technically I should be seeing the resolution limits imposed by diffraction here when shooting at F/18, but it doesn’t appear to be affecting my image quality to any meaningful degree.

The lens is set to manually focus – I’ve found that autofocus almost always grabs the back of the bubble rather than the front. I usually “pre-set” my focus based on the magnification I want – I can use the flower here for reference. When focusing, like I do with most of my closer macro subjects, I physically move the camera forward and backward to shift the focal plane rather than adjusting the lens from a static position. This gives more stable control, especially for smaller subjects.

Usually a test bubble is blown and shot, and allowed to freeze solid to figure out things like proper exposure and lighting angles. As you might imagine, most auto exposure calculations might have a tricky time figuring out an image like this. This bubble was likely the third or fourth one blown, as each one will freeze in a different way – some are simply more beautiful than others.

If you’d like to take a macro workshop with me during the summer months, there are still some spots available here: www.donkom.ca/workshops/ – we can’t shoot freezing soap bubbles, but I’m sure you’ll enjoy the other possibilities including water droplet refractions. 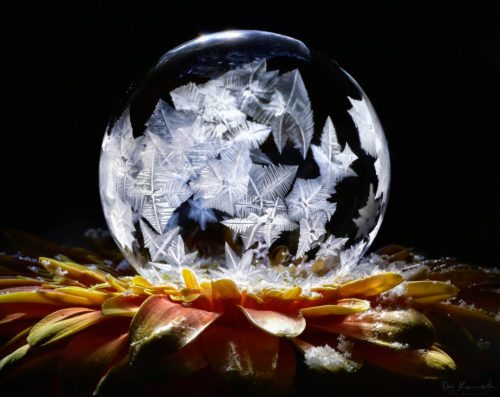