$3, that’s all it takes for either a cheap firework or a large Gerbera Daisy. I opted for the daisy, and coupled with a dandelion seed, this image was pretty easy to make.

The seed is held in place with a small clip, and so is the flower which is placed behind. All of my water droplet refraction photographs follow the same basic formula:

– Droplets come from a spray bottle and hit a surface that allows the water to bead nicely.
– A flower (or some other object) is placed behind the droplets. The droplets act like lenses and refract an image of whatever is behind them.
– Take a picture! Careful positioning of the flash and the angle of the camera is important and requires a bit of experimentation, but you can often see the effect with the naked eye and snapping the shot isn’t as difficult as it might seem at first.

Sure, this kind of image is something that we don’t normally encounter in our everyday lives, and need to be staged. That doesn’t make it difficult, and the simplest ingredients can combine for some fantastic effects.

Extra tip: This particular dandelion seed had a bent “stem”. This was important, as it allowed the clip to hold it in place while shooting straight through the “sail” of the seed did not show the end of the stem where the clip was holding it. It took a few tries before I figured this out!

Most of my macro shots include focus stacking, and this image consists of 16 separate frames; fewer than most! Because the depth in each image is so shallow, multiple images need to be combined to achieve the proper focus across the entire image. Such are the challenges of a macro photographer!﻿ 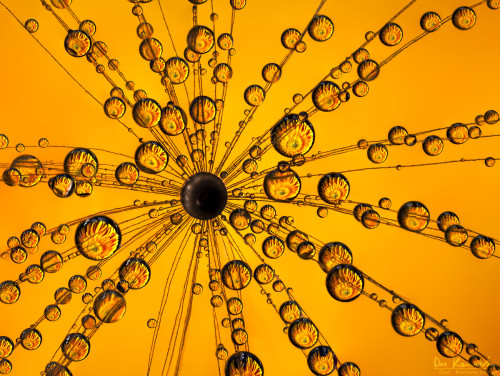