The Northern Lights have always fascinated me, and I feel so privileged that I had a second opportunity to photograph them on this trip. The aurora was blasting across the night sky on many occasions, sometimes obscured by cloud cover… but on clear nights the dancing sky was beautiful to watch. This is one frame that I’ve edited out of a time-lapse sequence.

This was shot with a fisheye lens, and the horizon line was corrected using various tools in Photoshop (mostly Warp and Liquify). I enjoy playing with the colours and details in photographs like this, bringing out the blues in the night sky without affecting the greens, all the while trying to bring out the subtle purple tones mixed in between.

These displays can be somewhat surreal to people who don’t live in this region, or ordinary occurrences that are taken for granted by those that see them frequently. Even to those people who see these dancing lights as commonplace, these photos can still capture a certain “magic” that the human eye doesn’t perceive.

Part of that has to do with perspective, and a 180 degree view from a fisheye lens is helpful. In my case, I had to work carefully with my lens as it was misbehaving and the aperture blades would get stuck. It’s in for repairs now, but I had to find a solution in the field – shooting wide open at F/2.8 solved the problem, which in turn allows me to shoot at a faster frame-rate and freeze the dancing lights in place. F/2.8 is usually not a common aperture for landscape photographers, but fisheye lenses have an inherently greater depth of field at any given aperture. 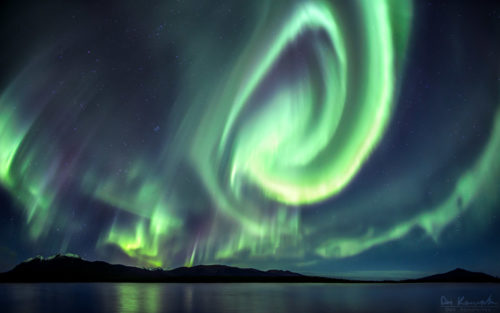