This image needs some explaining to fully appreciate. You’re looking at a thin sheet of ice photographed with cross-polarized light to induce vibrant colours created by the structure in the ice itself. View large, and PLEASE read on!

This is an experiment I’ve been wanting to do for a long while. If you have ice at the right thickness, this type of fun can be had. You’ll need to polarize your light source (I use a small cut sheet of polarizing film) and polarize your camera in the opposite direction. The light source should become dim or completely dark, which is what happens when two polarizers work in opposition to each-other. This is also have most “variable neutral density” filters work in the photographic world.

Normally, you see nothing. However, if there is an object that messes with the polarity of light in between the two filters, you’ll see the effects of this mischief. The effect is called “birefringence”, and many common items can create similar effects. Clear plastic cutlery is always a great choice, but most clear plastics behave this way. You can easily test this: if you have a polarizing filter for your camera, hold it up to your computer screen or cell phone and put a cheap piece of plastic in between. Birefringence colours! Magic!

Ice can do that too. Snowflakes are too thin for this effect, but ice growing on the surface of water can get much thicker. This ice was found in a bucket I left in our sunroom because the roof is leaking and it was collecting water a few days prior when it was warmer. During a recent cold spell, the surface of the collected water froze, and I thought to myself, “what if?” – and proceeded to do the above-described experiment but instead of a plastic utensil I used ice from the bucket. As soon as I saw the colours, I got excited, dropped everything on my to-do list and focused on this project for the next half hour.

Behind the scenes image 1: donkom.ca/bts/DKP_4635.jpg
This depicts the general setup: bright flashlight with a polarizer taped to it, aimed at the piece of ice.

Behind the scenes image 2: donkom.ca/bts/DKP_4639.jpg
Align the polarizer on the camera to be opposite of that on the flashlight (spin it until the light source goes darker), and the colours emerge.

Cropping in on just the good bits, we’ve got an abstract display of lines and colours resembling stained glass artwork in the window of a cathedral.

I tried experiments with window frost and other thin sheets of ice, but nothing performed as well as this very slow-growing ice I discovered in a bucket. All because I didn’t fix my sunroom roof in time for winter. It’ll be a spring project, but I’m glad my procrastination paid off. 🙂

If you’re interested in winter macro photography, you need to grab a copy of my book Sky Crystals: www.skycrystals.ca/book/ – it doesn’t contain the birefringent ice stuff, but it’s a great winter companion to understand snowflake physics and photography! 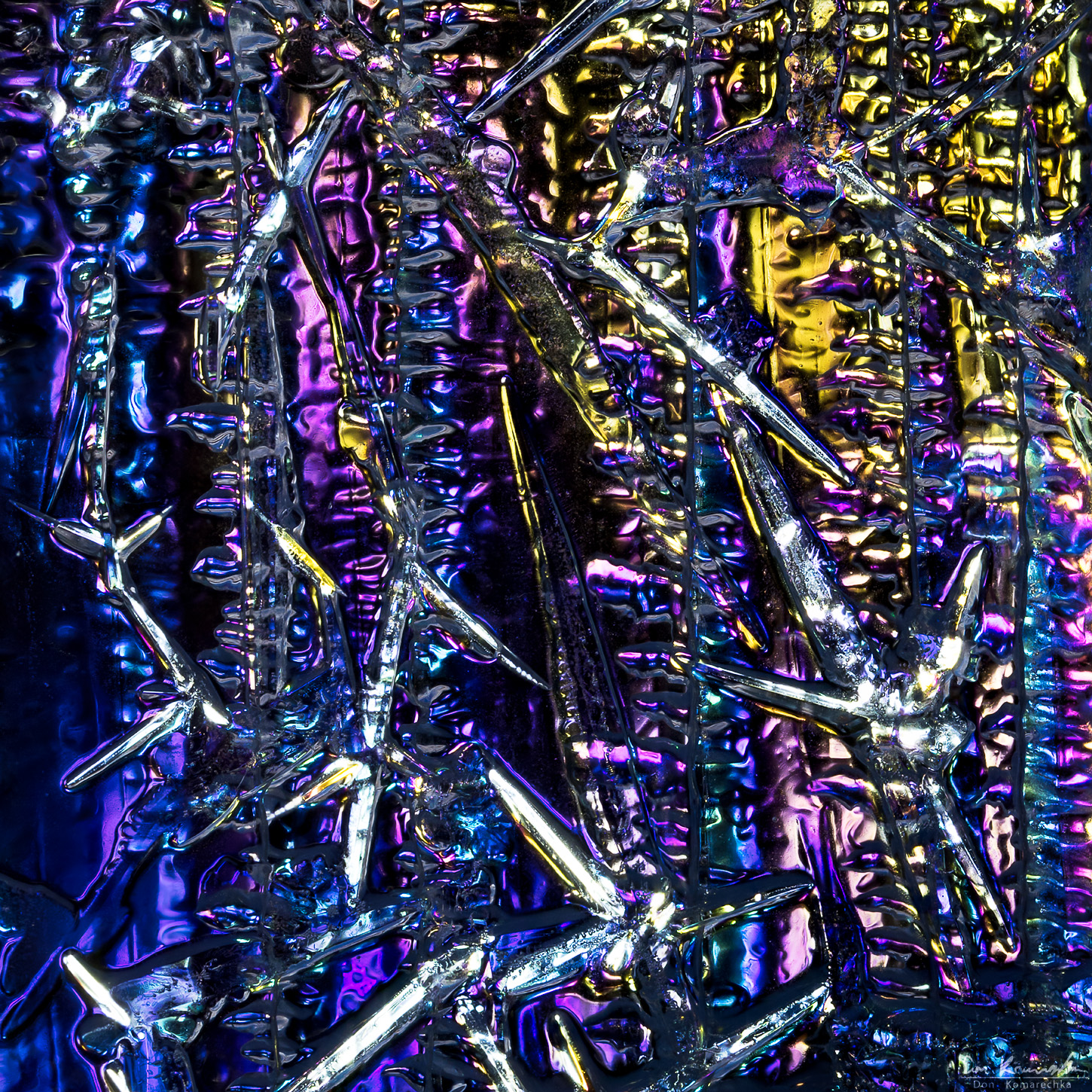