What happens when you place a soap bubble on top of an ornate cluster of quartz in freezing temperatures? It feels like the permanent quartz gives way to a much more transient crystal inside the bubble, resembling snowflakes rising from the stone. View large!

This was an experiment, as I have had many this winter. I wanted to see if I could combine what we normally associate with crystal (gems and precious minerals) with what falls from the sky, also a crystal – snowflakes. As a proxy to the snowflakes I’m using a freezing bubble to create snowflake-like crystals rising up in a sphere of ice. To put it lightly, this was a difficult image to take!

First, the quartz needed to be left outside for a few hours to acclimate to the cold temperatures and function as a catalyst for crystal formation in the bubble. Second, I needed to blow a number of test bubbles in the same region to adjust lighting, angles, and general composition. Third, while the bubble is actively freezing I need to move in with the camera and take the shot at the exact focus point required, handheld of course!

Many smaller crystals are all forming near the bottom of the bubble, because that’s where things are the coldest. If the quarts was too warm, the bubble might freeze from the top down or not at all before bursting. I try to acclimate my “ingredients” to be all the ambient temperature, but it’s hard to say exactly how much time an object requires. One can assume that a branch from my Christmas tree needs less time that a mineral sample, but the exact values elude me. I probably give more time than required! I purchased this piece of quartz specifically for this experiment, by the way!

The first bubble I blew surprisingly survived on the pointy crystals, and allowed me to do most of my camera and lighting adjustments. There are two lights – one for the bubble illumination and one for the quartz illumination. The light used to make the bubble glow is a NiteCore TM36, which has a slightly diminished brightness in the center due to its singular parabolic reflector. This shifts the colour slightly as well, giving the blue tones towards the top of the bubble. The quartz specimen is lit with a Nitecore TM26 with four LEDs and a more diffuse pattern, aimed as exclusively as possible to the crystal below.

I shoot most of my macro work handheld, and this is no exception. It’s impossible to predict exactly the size of the bubble and precisely where it will land, so a handheld approach make sense to work quickly. I used my Trioplan 100 lens for this shot, which isn’t ideal but my Canon 24-105L is having some softness issues at the moment. Typically I use the 24-105 with extension tubes for 1:1 (or slightly less) macro work, but the Trioplan came to the rescue. Trioplan lenses are known for their “soap bubble bokeh”, but you would see any of that here when the lens is stopped down to F/22. Careful alignment and focusing by physically moving forwarded and back with the camera while continuously shooting allows for me to get the best focus somewhere in the mix of dozens of shots as the bubble freezes. This was the best of them!

Many of these tiny crystals resembles snowflakes, and if you’d like to dive into the details of snowflake science and photography, check out my book on the topic: www.skycrystals.ca/book/ – worth a read for anyone interested in winter macro photography! 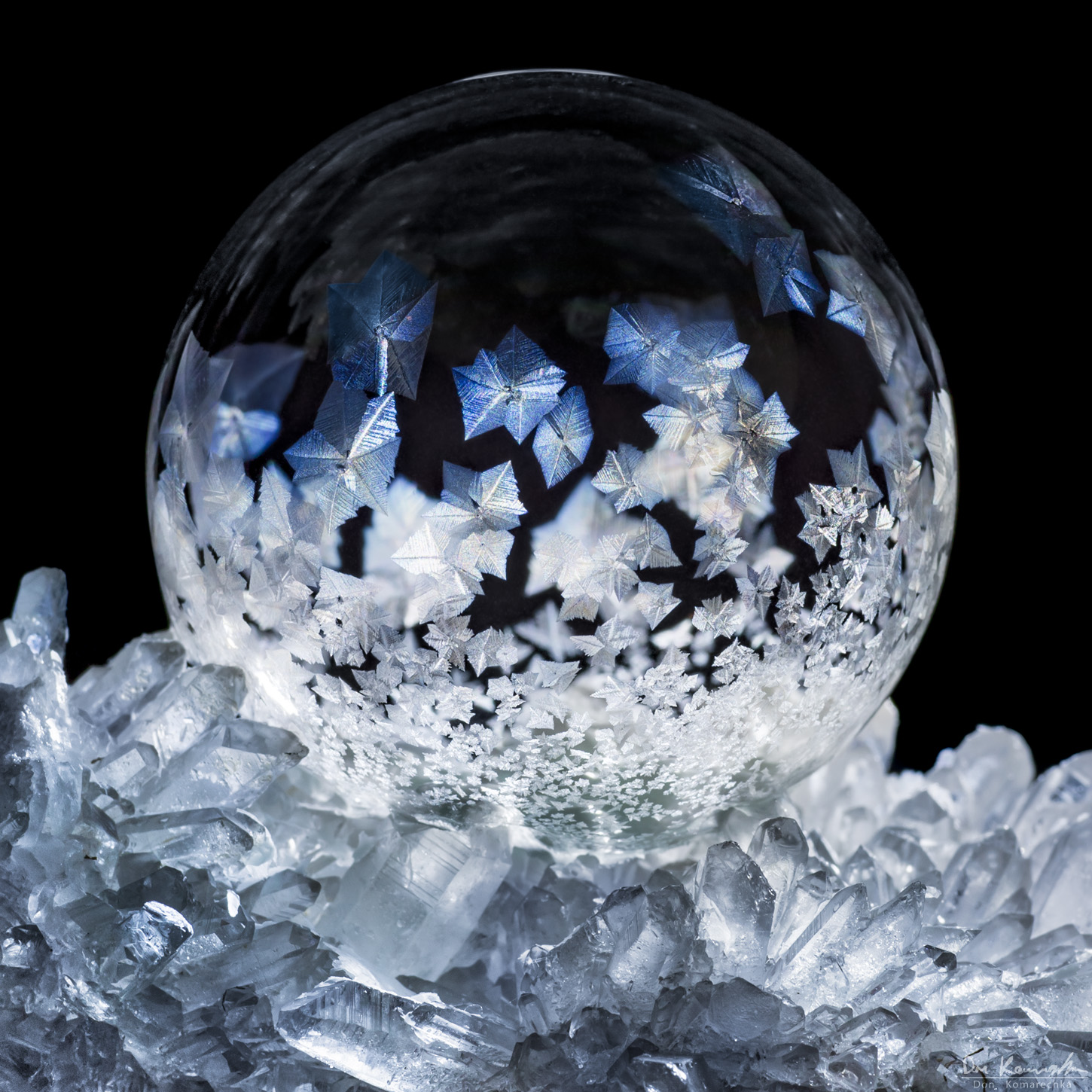