I noticed a fiery red and orange Gerbera Daisy at a local flower store recently, and I had to buy it – I knew exactly what I was going to do. This is a shot that I had pre-visualized a year or two ago but never got around to making. This is a single image taken with the Lumix GX9 and processed exclusively in ON1 Photo RAW. View large and read on!

I almost called this image “Spiral Chandelier”, but since this is an image of water droplets on a grape vine, “Corkscrew” sounded more fitting. Most vines send out little arms (tendrils) that wrap around other plants and trellises as a means for support. They often have a spiral-like appearance, so it wasn’t hard to find the right one for this concept. Five minutes later I was in studio setting this up.

Tendrils usually don’t take as kindly to spraying from a mist bottle as wildflower seeds do for this type of refraction photography. The droplets are better placed individually; the best way I’ve discovered to do that is through a hypodermic needle (thanks Kirk!). With a needle, I can carefully place a droplet exactly where I want it at the size I want it to be. I can also change the size by adding or removing water – a very powerful tool! In order to “build” the shot accurately, the camera was on a tripod and it was illuminated with a very bright LED flashlight.

Normally, I do all of my water droplet refraction images handheld and with flash, because finding the right subject angle often involves moving the camera around the subject itself as a point of rotation, rather than the point of rotation being the tripod mount. Getting the alignment of visual ingredients here was tricky and took about 5-10 minutes. If droplets were already in place waiting to be photographed, many of them would have evaporated in that time.

With continuous light, it was easy for me to see on the back of the screen how the droplets were cooperating. Not spherical enough or at the wrong angle, and you don’t get a great image appearing within it. One droplet, the large one on the left side, just wouldn’t sit in a good spot for a completely clear refraction. Adding water to it with the needle allowed for more of a refraction to appear below the distorted area, and added a fun bit of variety to the image I think.

This is a single shot from the Lumix GX9, cropped square for composition. Using just the Leica 45mm macro lens, I’m able to get about 2:1 magnification when compared to 1:1 on my full-frame camera, easily pushing me into the realm of water droplet refraction imagery without excessive cropping. ISO 200, 1/250sec, F/6.3. You don’t want to shoot with an aperture too small, otherwise the flower in the background comes into sharper focus and is distracting. 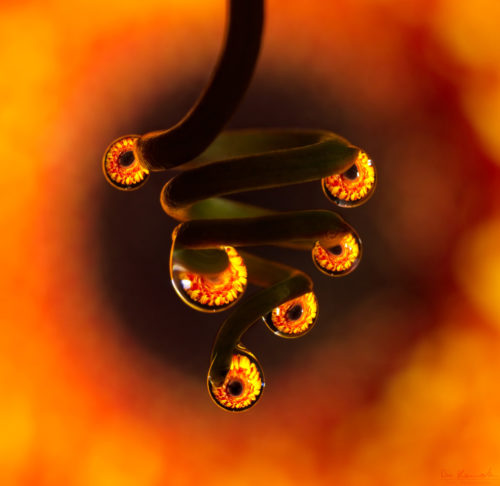