What happens when you push 30,000 volts of electricity through some vine tendrils? The corona discharge looks like this. Read on for the magic!

Passion flower tendrils take on a lovely spiral shape, which is what I used as the main subject for this Kirlian photograph. Kirlian Photography, also called electrophotography among other names, is the result of passing very high voltage through a subject to reveal the discharge of electricity from the cathode to anode.

Kirlian photography has its origins as far back as 1889, but was popularized in the late 1970s when two Russian inventors, Semyon Kirlian and his wife Valentina, found a larger audience for their experiments photographing electrical coronal discharges originally published in 1958.

There have been a lot of claims in pseudoscience and parapsychology regarding Kirlian “auras” in the past decades, and I remember my father mentioning that this technique could create an aura from a leaf that would remain intact even after a portion of that leaf was cut. As an 11 year old boy, this was quite the spark for my imagination, and made me think that there is more to the world than meets the eye. It turns out, there is: residue and/or moisture from where the leaf was placed could still be reactive to the high voltage. If the glass plate where the leaf was placed was cleaned of these remnants the aura around the cut portion of the leaf would disappear. There was a scientific explanation for this, but I didn’t learn it until years later.

While some people feel that the stochastic electric ionization processes here are mystical and beyond the veil of our own existence, I remain a very skeptical person. As a skeptic, I’m thirsty for knowledge and am forever trying to answer questions for myself, not taking them at face value from others. I’ve photographed flowers, leaves, and tendrils like this all with different and intriguing results; some are more beautiful than others, but it’s a thrill to see the result no matter what it is.

The circle that the tendrils are emerging from is a plate base of plastic, designed to keep the subject flat against the glass that the electricity is flowing through. The hole is for the anode (negative charge) to pass through to the subject squished beneath the glass (cathode, positive charge). The anode begins as a little metal wire with an alligator clip on the end which is clamping all three of the tendrils together.

The Kirlian photography device used to take this picture is the FullSpectrum Kirlian Electrograph Camera JAK 2000-C (here’s a photo of this setup: donkom.ca/bts/IMG_3875.JPG ). I believe they have discontinued sales of this, as I can’t imagine there being much public demand. That said, it’s a fun piece of gear to use! Shot with a Lumix GX9 and a Leica 45mm macro lens, edited in both ON1 Photo RAW and Photoshop to utilize the strengths of each. 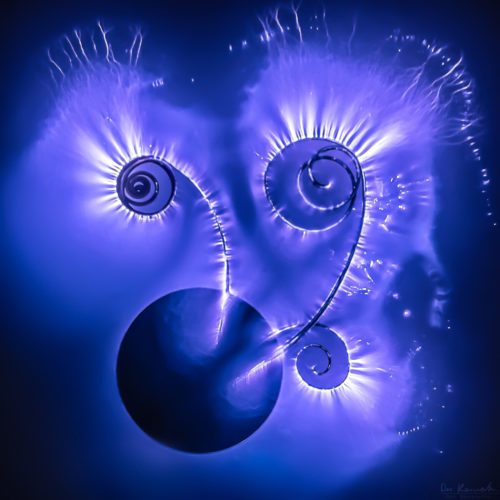