Here’s a question for you: Is this a snowflake, or simply a branch of one?

Some snowflakes form as “split stars”, basically two parallel plated connected by a very short center column, and the top plate can have as few as 1 or as many as 5 of the 6 possible branches. This could be the top plate with one branch, after being sheared from it’s twin plate on the bottom.

Or, this could be a broken branch from another snowflake – early enough in it’s life that it began to grow from the breaking point, similar to a cutting of a plant taking root itself.

In the end, it doesn’t really matter – it’s still beautiful! 🙂 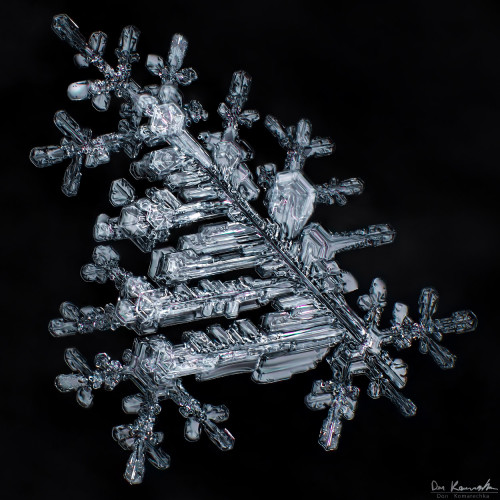 Buy the snowflake book!:
Enjoy my snowflake work? This 304-page hardcover book will detail all of the photography, science, and beauty of snowflakes. Check it out!. For more snowflake images, click here for an up-to-date gallery of hundreds of my best photographs.